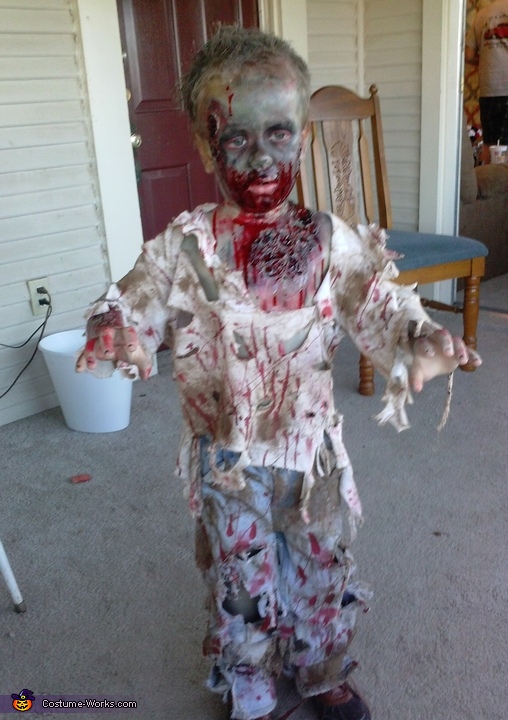 A word from Stephanie, the 'Zombie' costume creator:

So i asked my 4 year old son, slade, what he wanted to be for holloween and his answer was a zombie cop. And that had me stumped, i had no clue how i was going to do his make up. So i looked on YouTube and their were tons of how to videos for zombie make up. Well after i found out it wasn't going to be too complicated we went walmart to get the cop costume and he said he wanted a new watch. So we told him if you get the watch your going to have to be a regular zombie instead of a zombie cop and he said he was sure. So any ways it was slades idea to be a zombie and i found out how to do the make up on YouTube and made his costume all myself. I started by getting an old shirt and pants and cut them up and tore holes in them in random places. Then i took his pants and shirt and rubbed them in the mud so he would look like he rose out of the ground. Then i got fake blood and dripped it all over the muddy shirt and pants and to finish off the bloody clothes i splattered some blood on them as well and let it dry on hangers. As for his make up, all i did for his zombie bite and sores was squirt school glue on his skin and then i tore a peice of one ply toilet paper and patted that down. Then i squirted another layer of glue and spread it around with my finger and added another toren peice of toilet paper and slightly bunched it up for that wrinked look. And after that i used a ink pen to slowly tare round holes into the still damp toilet paper. And once we were satified i grabbed my blow dryer and dried the glue. Then finally came the fun part, we mixed up some body paint to a nasty dead green color and spread that all over, including the wounds. Then i put make up on his face and traced the inside of his wounds in black and used red on the inside of the wounds. Then i used brown, yellow, purple and red to make his wounds apper inflamed, bruised, and infected. Then we put fake blood on his mouth and the inside of his wounds. And to really tie it all together we put moose and baby powder in his hair so it looked dirty as well. All in all, his costume cost us 10 bucks to produce and maybe 1 hour of preparation, but it was well worth it. He impressed people so much trick or treating that almost every person gave him extra candy for how awesome he looked. And one man was so impressed he told slade to take all the candy he wanted. He had a great holloween. Hope you find slades costume very scary, creative and realistic.