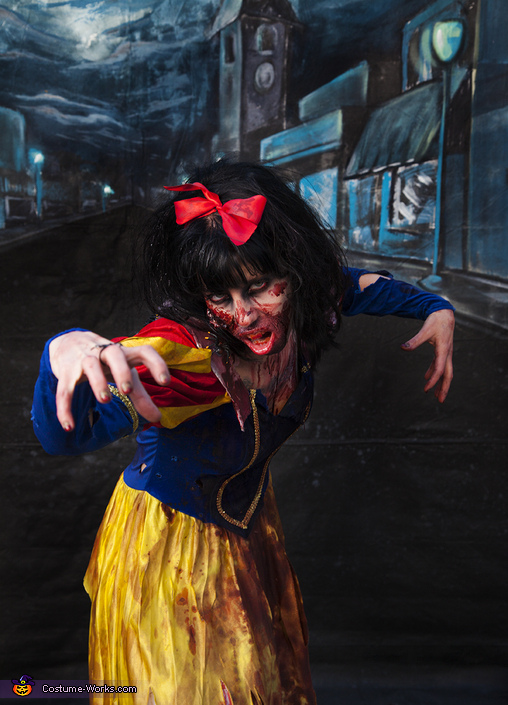 A word from Carolyn, the 'Zombie Snow White' costume creator:

I was participating in a Zombie Walk, and since I wanted to win, I knew I needed something good. I've always wanted to be Snow White for Halloween. I even have people tell me I look like her all the time, not to mention how much I love animals! Anyways, Zombie Snow White just seemed like the perfect costume!

To make this costume, I ordered a super cheap snow white costume online, it was nothing but a poorly made dress. I used a hot glue gun to attach the white collar. I also used a glue gun to attach a few fake spiders as a finishing touch. I took an old white cotton, poofy skirt and sewed it to the inside. I took scissors and started ripping holes in the dress and cutting up the ends and tearing it to make it look tattered like I just rose from the grave. Then I made two different types of fake blood, and covered the dress in it. I found a red ribbon from Christmas and tied it in a big bow around my head, then I got it nice and bloody too! Next I teased my hair and splattered a little fake blood in it too. Then the make up. I did all the make up myself, and all the wounds are made from tissue and glue, with make up and fake blood. It took me about 6 hours to make this costume and it took me about 4 hours to get! ready with all the makeup and stuff. And overall, I spent about $25 making this costume.

The reactions I got when I wore this costume were priceless! People were yelling for me, "Snow White, Snow White". People told me I had the best costume they've ever seen. There were multiple times when there were long lines of people to take a picture with me! I was in the local news paper on the front page. (Las Cruces Sun News, Sunday 10/26/14), I am in multiple videos and pictures on social media and other local websites, and I was a huge hit!!

I wore this costume twice this year. Once for the Zombie Walk and once for a costume contest at a local night club. Both times, I stole the show!! I won "Las Cruces, NM Zombie Queen 2014" at the Zombie Walk with my Zombie Snow White costume!! I had so much fun this year, and I don't know how I'll ever out do myself in years to come. I would truly love to win this contest and put the cherry atop of my best Halloween ever cake!!