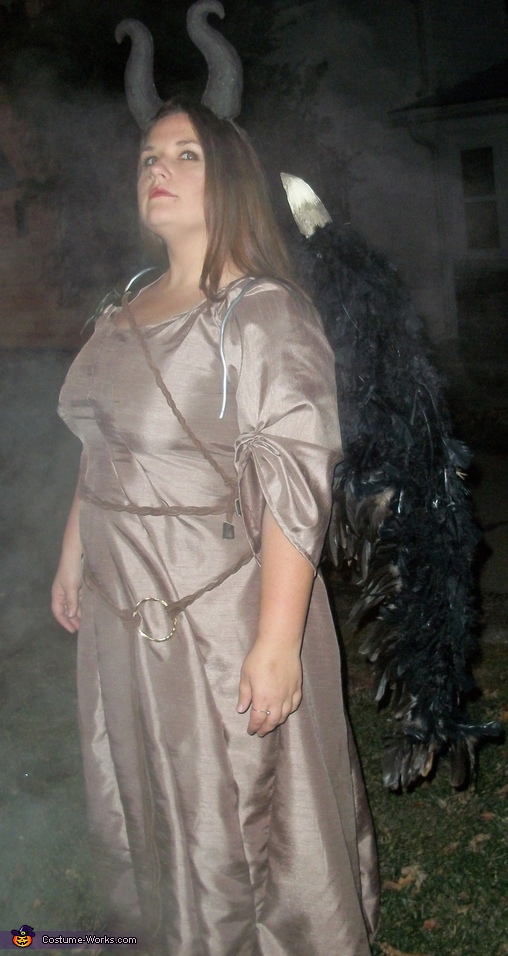 A word from Amber, the 'Young Maleficent' costume creator:

1) How did you come up with this costume idea?
When I saw Maleficent in theaters and her new, fantastic and mysterious portrayal, I knew I had to be her. I wanted to be a hero and a villain. I wanted to be her in the form immediately before her innocence, and wings, were stolen. She was powerful, beautiful, mythical, and even in her youth, she was strong and her image alone could intimidate the strongest of men.

I could think of no better costume for Halloween than a woman with mighty, dark wings, horns, piercing eyes, and magic that none can equal. I wanted to step up to the challenge of recreating what Maleficent represented: power, beauty, innocence, and the ability to impose a growing smoldering fear on any who would cross her.

I chose the point of youth prior to Maleficent's betrayal by her love because I wanted to hold on to the true quality in her, the good. She needed to have her true self represented. She was a fairy, she was good, she saw the world with different eyes. I didn't want to present her as her all black, wingless self because it was too close to her original portrayal, and it didn't represent her for who we now know her to be. She is a warrior. She is good. The darkness in her was planted and grown by the evil done to her. In the end justice and love still prevail in her.

I wanted to be that part of her.

So I chose to show her in her tan clothes not black. Her wings, and horns, and shoulder armor were there. She was whole.

2) What items did you use to make this costume? And how?
This costume has many components. I will start with the wings.

For the wings, I created them with metal wire, wire mesh, glue, string, horns sculpted from a mold and painted,and feathers.

I bent thick gauge wire to the shape I wanted the wings to be, at rest but paritally spread.
I then attached wire mesh (similar to screen door material) to the frame by sewing it on. I then cut it down to be even and hold the correct curve at the bottom.
Next I created the horns that fit atop the wings. I created a mold from plastic wrap, taped over it, covered it in modeling paste and when it dried I painted it.
I glued rooster feathers to the frame which now had the mesh, moving from the bottom to the top, then I used black chicken feathers for the outside edges and tops of the wings.
Lastly I attached the horns atop the wings.
They were held on by simple thick gauge wire shoulder "straps"

Next, I created the horns to be worn atop my head. I did this in a way similar to how I made the horns for the wings. This time I used aluminum foil, plastic wrap, modeling paste, paint, glue, and a store bought headband.
I used aluminum foil to create a similar shape to her horns.
I wrapped it in saran wrap to give it a more even texture and make some minor tweaking to the shape.
Then I covered it in modeling paste, leaving some roughness for texture.
Once that dried, I sanded down some spots that were too rough or made the horns too asymmetrical. Then I painted them a deep dark brown.
Lastly I sewed and glued them to the headband.

The dress was made from a tan, textured taffeta. This was not the same as the lightweight material worn by her. I tried to represent the movement with asymmetrical, natural looking lines and rouching.

I made her belt and shoulder armor from leather lace, leather, and rooster feathers. The belt buckle was made from gold-toned wire, hand bent into a spiraled circle. I braided leather and attached it to the circle for the belt.
For the shoulder armor, I cut a leather piece to shape, glued feathers around the edge, and braided leather lace to make a strap to secure it.

Lastly I wore purchased contacts, because the look would not have been complete without her piercing eyes.

3) What reactions did you get when wearing this costume?
I received many reactions of awe and excitement. Most people were in disbelief that I made almost every bit of the costume, and were even more impressed that I did it all in less than a week total time combined. People wanted to hear the story of how I made it, where my idea was from, and where I learned to do such things.

There were many pictures taken. There were many requests for me to make costumes for next year. Most people who did not know who Maleficent was, now wanted to know.

Truly I have no formal training. I simply see something I want to make and it comes together in my head fairly naturally. The hardest of the work is getting it from my mind to a tangible and accurate product. Sometimes it happens just right, others I have to solve problem after problem when materials do not do what I thought they would. I never quit or give up. As they say, "where there is a will, there is a way."

4) Any additional information you'd like to add?
I love making costumes. I love being able to become someone. I work very hard with strong intention to give a good representation of who I am, and who I am trying to portray. I try to be thorough in details. I even tried to make the main picture eerie with fog to give the full effect. The costumes I make are chosen not only for their cool and interesting qualities, but for the emotional connection I develop for the characters. I pour my heart into my work and I enjoyed creating my 2014 costume with every fiber of me. I would love to be recognized and awarded for doing well, but in the end, I will be ecstatic in any case because I made this, I love it, and I had a wonderfully dark and fantastical Halloween because of it.