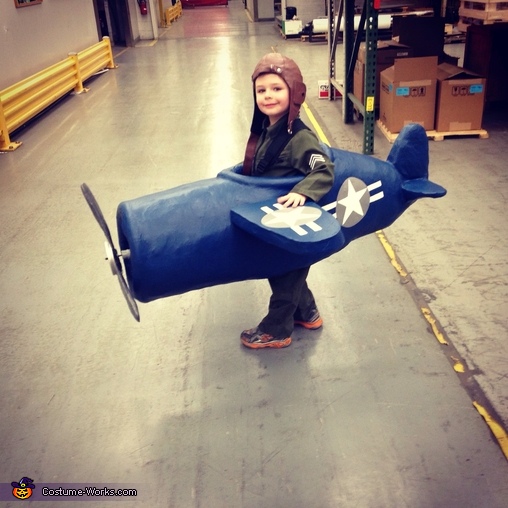 My son, Dominic LoCascio (four years old) wanted to be a pilot. I've always been very interested in the subject of the Second World War and that time period so I decided to dress him in military gear fr that era and we constructed a plane modeled after the F4U Corsair, one of the most popular fighter planes of that time.

We started with a frame made from lightweight TIG wire that my husband welded together. We then hot glued window screening onto the frame and then covered that window screening in Great Stuff spray foam insulation.
After the foam dried we used large serrated knives to carve out the shape of the plane. At this point we realized the plane was far too long and so we cut it in half, removed a 6-7 inch section, and then fused it back together with wire and more foam insulation.
For the wings, the shape was cut out of a piece of foam board, covered in the foam insulation, and then the shape was carved out.

The body, wings, and propeller were then covered in paper mache to create a smoother surface for the paint, which was leftover indoor latex paint I had from painting out bedroom and kitchen. We used a Lego wheel, rod, and plastic lid from a container to give the propeller the ability to spin.

The wings were attached to the body with hinges so that they could be pulled up when walking through doors and hallways. The strap was taken off of our sons golf bag and attached to the inside of the body of the plane with long gutter nails.