I Came In Like A Wrecking Ball
by Amanda

Miley Cyrus on the Wrecking Ball
by Vanessa

Miley and Billy Ray
by Amanda 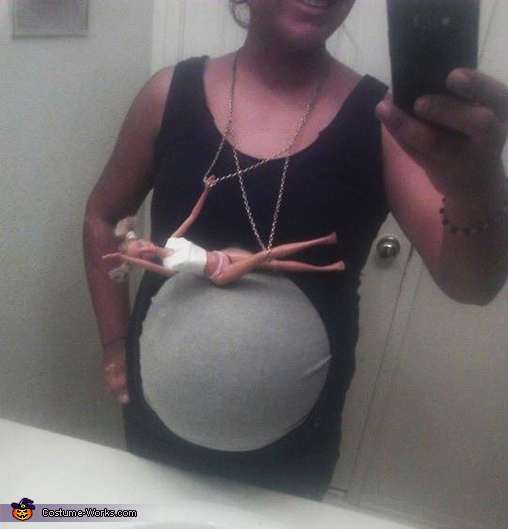 My costume this year is the Miley Cyrus video "Wrecking Ball". I used my pregnant belly as the wrecking ball, and added a "hot mess" barbie I created as Miley Cyrus. It was inspired by my friend suggesting I do something this year different from other pregnant ladies. She suggested a pregnant celebrity but we couldn't decide of whom to choose. We wanted someone who is famous and well known, and someone that was easy to do. We googled different pregnant celebrities and ended up seeing a wrecking ball picture of Miley Cyrus. We thought it was genius! I didn't even have to spend a dime I had everything available in my closet already! :) I put on a grey tank top and an old black shirt over it. I then measured my belly and cut out a circle from the black shirt so that the grey tank top could be exposed and resemble a wrecking ball. I took an old barbie, cut off all her hair, put it into two ponytails, and hot glued on a piece of computer paper cut out as a cropped t-shirt. I grabbed an old chained necklace and hot glued the barbie onto the chain in an awkward swinging position. After that I was finished with the entire costume! :)