Wreck-It Ralph and Vanellope
by Lisa 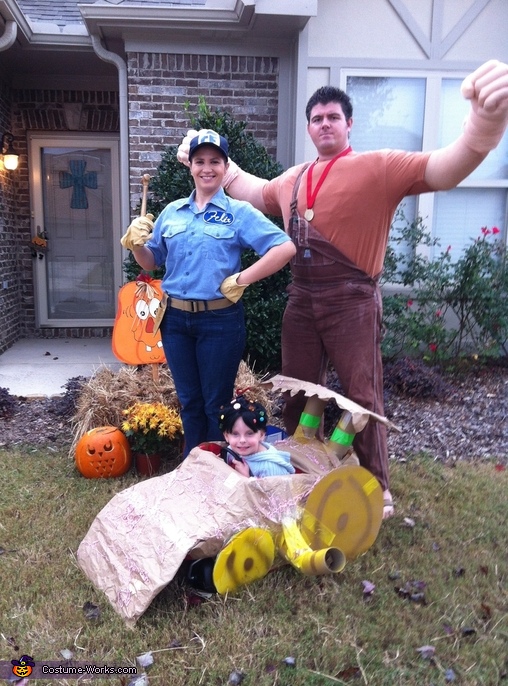 The 3 characters and race car

A word from Jessica, the 'Wreck-It Ralph Characters' costume creator:

Our 4 year old loves the movie Wreck-it-Ralph, and she came up with the plan that she would be Vanellope Von Schweetz, Daddy would be Wreck-it-Ralph, and Mommy would be Fix-it-Felix. We looked for some store-bought costume items, but the only thing available was the Ralph wrecking hands. So off to many thrifts stores we went searching for our costume pieces. Every piece of clothing was purchased for less than $6! For Ralph, worn by my husband Curtis, we died jean overalls brown, bought the big orange shirt, and hair gel for the crazy hair. The toy hands were out most expensive purchase at $20. We used brown eye liner to thicken up his eyebrows and sideburns, and the secret to the big muscles....bubble wrap covered in tights! Easy, quick, and effective. For Felix, worn by me, used my jeans and bought the blue shirt, hat, and work boots from the thrift store. I made the "patches" for the hat and shirt with card stock covered in colorful electrical tape. We painted an old hammer gold and found the toy tool belt and gloves at a thrift store! Voila, "I can fix it!" For Vanellope, worn by our daughter Victoria, we found the hooded. sweater, brown skirt, and leggings at the thrift store. We added the pink touches on the sweater with yarn. She already had little black shoes. For the hair...a black ponytail wig cut to a shorter length for the character. The plain wig was only about $7! After that, armed with a hot glue gun, small hair clips, thread, and real twizzlers, gummy bears, candy buttons, and peppermints (oh and a load of bobby pins) I made a candy wig for the "glitch!" Sugar rush! We received soo many compliments this year, and we were just trying to make our little girl smile. ;). Last, Daddy decided to turn her play car into Vanellope's race car. Brown packaging paper, tape, and cardboard circles and tubes formed the frame of her racer. He then used a small amount of spray paint for the wheels and silly string to decorate it the messy way it ended up in the movie! These costumes were so much fun to make, easy to create, and a blast to wear around.