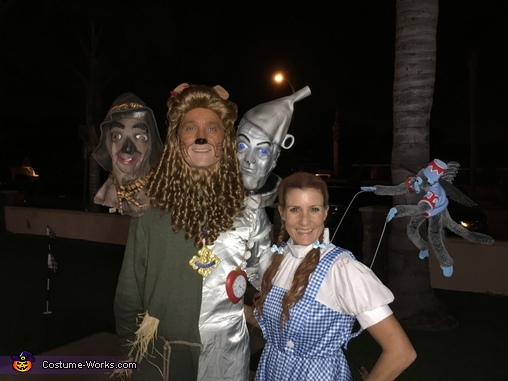 A word from Damon, the 'Wizard of Oz' costume creator:

My wife Shelley is dressed up as Dorothy and I'm the Cowardly Lion, Scare Crow and Tin Man all in one. We came up with the idea when I saw a picture of a girl that was dressed up as Dorothy and her dad built a large Paper Mache Flying Monkey behind her similar to my wife’s costume. We decided to duplicate the girls costume while I would go as the Wicked Witch. We then decided to be a little more original and make me all three characters at once.
We decided to go with a smaller Monkey so she could walk around, Party and Dance all night and still be somewhat comfortable. The monkey is a standard store bought hanging monkey (stuffed animal). We spray painted it silver and painted the face, hands and feet light blue. We hot glued some gray fur to the chin and back of the legs. She sewed a small jacket with some red and white felt for details. The hat is made out of a Dixie cup and hot glued to the head. I ran 14 gauge metal wire through the arms and legs to be able to control the shape to make it look as if it was chasing her. One long continual piece of 10 gauge wire went through both arms. I left about 18 to 20 inches on each end to secure to Dorothy. We normally use back packs for support but needed to be a little more stream line this year on both of our costumes. I made a PVC bracket for each of us to use to support our costumes. We used 1/2 inch PVC and two 90 degree elbows for her, formed it in the shape of a U and supported the bracket inside the back of her sports bra. Cut two small slits in the back of the dress and ran the metal wire into the top of the open PVC. The wings on the Monkey are Black stiff felt with gray paint for feather highlights. A standard Dorothy dress, temp hair color, red shoes, bows, a basket and Cairn Terrier (Toto) stuffed dog completed her outfit.
I purchased the Tin Man and Scare Crow Masks and a Cowardly Lion wig on-line. I built a PVC bracket for my back with two posts (shoulder width) coming up about to my ears. I used ½ inch PVC, 2 90 degree elbows and 2 Tee fittings to make my bracket. We sewed straps onto the bracket with Velcro. One went around my chest and two went over my shoulders, similar to a back pack. We bought two Styrofoam heads and made a hole in the bottom of each head. Put the masks on the Styrofoam heads and slid them onto the PVC posts. I used Ping Pong balls for the eyes with acrylic paint and sharpie and then duct taped them inside the masks. We found the silver outfit, green shirt and brown pants at a Thrift Shop. Cut them in half and sewed them together. Stained some existing rope I had in coffee overnight. Found a pair of brown shoes and painted one silver. Painted one glove silver and left the other white. Bought some Hay and hot glued it to the shirt and pants. Cream makeup (brown, yellow, white and black) and a brown make up pen for my face. We also found a courage badge and the heart clock at a local Halloween store that completed the costume.
The costumes were about $250 total. We spent about $175 for mine and another $75 for hers. The most expensive cost was the two masks and wig for my costume. They were about $100 for all three. Most the other items we found at Thrift Shops, Halloween stores and Craft stores. We saved money on some of the items we already had so it could have cost a bit more. Prepare to use a lot of Hot Glue and Velcro that is a staple every year for our costumes.
Our costumes were a hit at our annual Halloween Party. We go down town every year on Halloween night. Lots of people wanted to take their pictures with us. We took First and Second Place in two different Costume Contests on Halloween night. Hope this helps and I can’t wait until next year.