White Phoenix of the Crown Costume 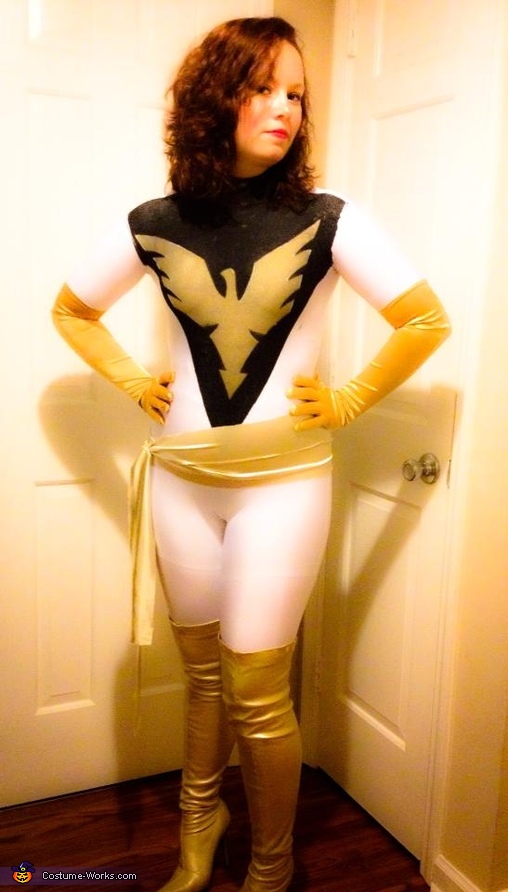 Full body shot of White Phoenix of the Crown costume

A word from Jessica, the 'White Phoenix of the Crown' costume creator:

White Phoenix of the Crown is a version of Jean Grey from the Marvel comic books. I created this costume for myself because I love Jean Grey but I didn't want to run into anyone wearing the same costume as me. White Phoenix is not a very frequently done costume, so I felt that it was a pretty safe choice for a unique Halloween costume. I purchased a full white bodysuit and gold boots, and reused a pair of gold gloves I already had.

I created a stencil for the chest emblem with poster board, carefully cutting it so I could used both the inside and outside of the stencil. Next I taped the stencil down so that I could paint the gold phoenix on the chest of my bodysuit. I used gold fabric spray paint to do this, and let it dry overnight. The next day I carefully removed the stencil and covered the gold phoenix with the inside of the stencil to protect it from the black paint. I also taped out the V shape for the black "background" on the chest, and covered the rest of the costume in plastic so that paint didn't get on it. I let the black paint dry overnight. In the meantime I cut out the belt from gold spandex fabric. Once dried, I took the stencil and plastic off, and put on the bodysuit. There were a few gaps between the black and gold, which I filled in with sharpie. Finally, I fixed my hair and make up and put it all on and went out on the town.