Wizard of Oz Family
by Jessica

The Wizard of Oz Characters
by Wendy

We're off to see the Wizard Costume 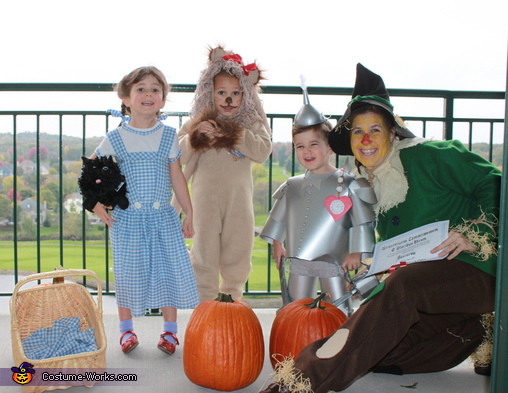 We're off to see the Wizard

A word from Sascha, the 'We're off to see the Wizard' costume creator:

Me and my three children dressed up as the 4 main characters of the Wizard of Oz. I read a lot of books to my kids and we read the Wizard of Oz a few months ago. My children loved the story and began acting out the characters from the book as they so often do. However, my daughter owned a pair of sparkly red shoes so I asked if they wanted to dress up as the Wizard of Oz. There was a resounding yes, even though Dorothy wore silver shoes in the book.
The Costumes
Dorothy's costume was made with blue and white gingham. I made a top and bottom to look like a dress as it was easier given my novice sewing skills. We bought blue socks and she already had the shoes. I had a basket but no Toto. I used black felt, pillow stuffing, yarn, hot glue and google eyes to make a Toto.
Lion's costume was made with fleece, faux fur, hot glue and yarn. I used a footed pajama as a pattern and just added fur. The tail was stuffed with pillow stuffing and the mane was hot glued to a piece of fleece measured to fit my daughter. I glued the yarn so that it would appear curly and added a red bow from my Christmas stash. I finished off the costume with a courage medal made with white paper, cardboard, crayons, glitter glue, ribbon, and hot glue.
Tin Man's costume was made with posterboard, spray paint, hot glue, silver ribbon, cardboard, duct tape, and a funnel. I cut out two pieces of posterboard using a tank top as a guide, but cut it quite a bit bigger. I also cut out pieces for arms, legs and neck, then glued everything together and painted with silver spray paint. I used hot glue blobs for the buttons. The costume was easy to put on with the use of ribbon to tie the pieces together once on. I added a stretchy string to the funnel so the hat wouldn't fall off and stuck a piece of pillow stuffing in the top to resemble the smoke that puffs out of the Tin Man in the movie. To accessorize I made an ax out of cardboard and duct tape, an oil can out of cardboard, duct tape, hot glue and silver paint. To finish off the look I made a heart out of cardboard, red construction paper, hot glue, rainbow loom rubber bands, and fake flowers I had.
The Scarecrow's costume is made of fleece, felt, floral straw, burlap, rope & hot glue. I made brown pants and a green jacket and black hat just like in the movie. The patches on the pants are different, but the jacket does have a blue button. I glued floral straw to the outfit rather than trying to actually stuff it. I made a neck piece out of yellow fleece, burlap and rope and closed it with velcro so I didn't actually have to tie rope around my neck. I made a black felt hat with green fleece tied around it and glued straw to it. I even made a diploma for the Scarecrow using white paper, blue colored pencil, caligraphy pen, glitter glue and red ribbon.

It took about 3 weeks to make the costumes and I tried to make them as close to the movie as possible and included lots of detail. I then let the kids watch the movie about a week before Halloween so they could see what the characters in the movie were like. They were thrilled to wear the costumes and act out their parts! We went to the safe trick or treat in our neighborhood and received a great deal of attention. Many people were amazed at the detail and asked to take our picture. The mayor of our town introduced herself and the group organizing the event applauded and said "Best costumes of the day!" I loved making these costumes and had a blast wearing them!