Wayne and Garth
by Desirae 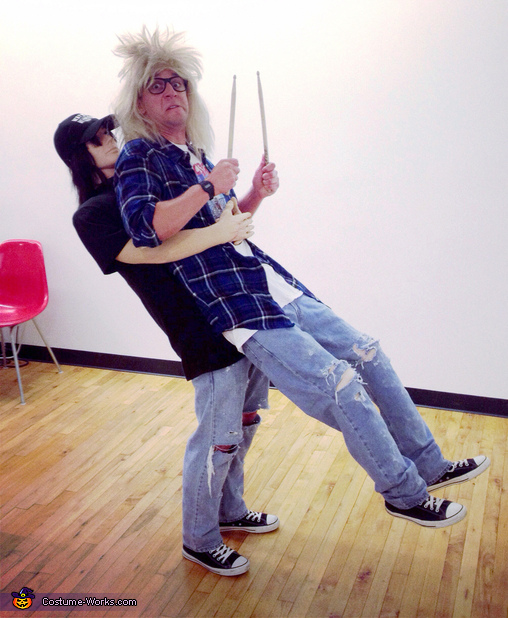 A word from Christopher, the 'Wayne's World' costume creator:

I wanted to do a 2-person costume, but I also wanted to do a costume people would immediately recognize. I've always really liked Wayne's World, and I thought being Garth would be a lot of fun, so that's what I decided to do.

I constructed Garth's legs and Wayne's torso/shoulders by gluing together multiple layers of construction styrofoam (the pink/purple stuff they use on new houses), and carving it down to human shapes with a kitchen knife. It took a few rounds of trials to get it just right - including adding bulges for the knees (and crotch), and getting the calves & ankles shaped right for socks & shoes. I shoved/glued some PVC pipes into the bottom of the legs, so they stick out a little bit to allow a long skinny piece of wood to attach and as feet, so the shoes don't fall off. The legs are held on by a belt around the front belt loops on Garth's pants, and around my back. There's another belt around Wayne's torso to the front of my waist to hold him into my back. They're not the most comfortable, but they work. Garth's legs are wrapped in ace bandages to make them flesh-colored. The magic is really in the shirts: The shirts I'm wearing are cut in the back, and the bottom of the backs are in front of me to fit around Garth's fake legs. Wayne's shirt is cut in the front, and goes around my waist. It's a bit tricky to get into - I basically have to "put on" Wayne's torso like a shirt. Wayne's head is a "Cosmetology Mannequin Head" made for practicing cutting hair - it even came with (real) hair; I just had to trim the bangs a little to make it Wayne. And I screwed his hat on so it wouldn't fall off. His arms are "zombie arms" that look like they're hacked off just below the shoulder. I sculpted the shoulders out of styrofoam as part of the torso, and duct taped the zombie arms to it. The zombie hands have velcro on them to hold them together and help hold Wayne's torso to my body.

Most people naturally think there's somebody carrying me around at first. Then they notice the guy in the back has a mannequin head, and they realize something's up, but they can't wrap their head around it. Most of them ask for a picture. Others touch me all over (well, not ALL over) to see what's fake, and what's me. Others just smile and give me a "Party on, Garth." I of course return the favor with "Party on, Wayne! Right on, man! Cool." It's fun being Garth, because he's so shy and awkward.

Party on, Wayne! Party on, Garth!