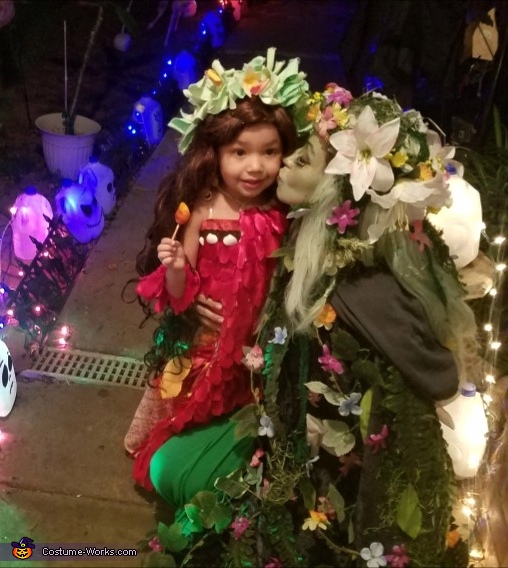 Tefeti thanking Moana for her heart

A word from Eileen, the 'Voyager Moana and Tefiti' costume creator:

My daughter is Voyager Moana and her costume was heavily inspired by the limited edition doll put out by Disney in March of 2017. First off, yes I used a store bought costume but never like how cheap they look so I made sure to make it her own and had lots of fun making all the pieces.I collected items in advance to make it happen. I used a extra large pillow case to detail the cape. The burlap portion of the cape and the pillow case was purchased at a thrift store in LA. Her headpiece, ankle piece and armband was a piece of cloth I bought at my local fabric shop. I cut each piece and dyed them in food coloring, made my own scrunchies so they could easily be worn by my daughter. The fringe was also purchased at the fabric shop and also dyed in food coloring. I used extra burlap to make the front leaf piece the belt is also dyed cloth detailed with pencil. I learned how to make felt plumerias off YouTube, which were so fun to make. Which included using a glue gun, felt and chalk. Obviously my daughter's costume took a lot of time, while mine was detailed but to me it was easy. I dyed my blonde wig green, bought a cape at a thrift shop, bought assorted fake flowers, three different types of moss,a wreath for my head and fake Vines. Put it all together in a few days and enjoyed every minute of it 😊. I love making costumes, that's why Halloween is my favorite time of year!