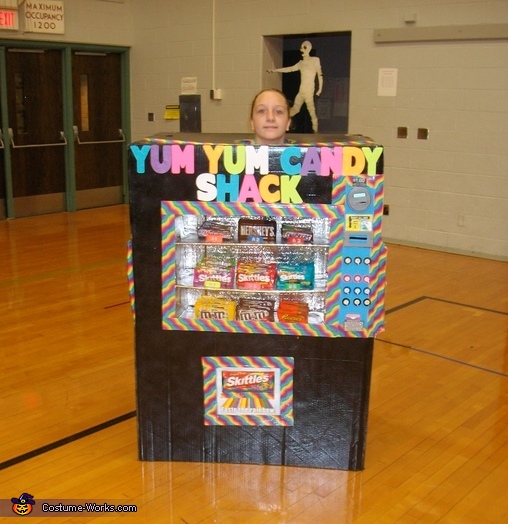 Dalaine waiting for the customers

A word from Melissa, the 'Vending Machine' costume creator:

Dalaine Nolan as a Vending Machine.

This costume is definitely one of a kind. The idea for this costume came from Dalaine wanted to be a skittles girl and we could not come up with how we would do that. So we typed in the internet "skittles" and many things came up along with vending machines.
Our family had a lot of fun making the costume but we also had a lot of trouble with the costume. First we went to Lowes and asked for a refrigerator box and a range box. Dalaine did not want her feet to show. We used the refridgerator box and cut it down to the height of Dalaine. Brian, Dalaine, and I spent a lot of time making shelves out of the range box. When we got the shelves in we were not happy with how they were sagging in the middle and not able to support the weight of the candy. We were getting frustrated. Then as I was looking around the box I said this box is so wide how will Dalaine be able to go through doors. Brian tells me it is too wide and she will not be able to go through doors. I told him this is unacceptable, as most of the places we take them to we have to go through doors. Brian had to take this box and cut the back off and tape and re-glue it. Once he decided to do that he decided that the best thing to use for the shelves was laminate wood as it would better support weight of the candy.
Dalaine loved to decorate the vending machine, she used stickers, lots of hot glue, alot of the crazy ducktape looked like rainbow. When Dalaine first came up with the idea of a vending machine she said that she would love for people to be able to put money in and to be able to dispense candy out. So her and I put our heads together to come up with a way. Dalaine asked if all money that she made on the candy sales if she could donate it. During summer she goes to Casowasco camp, so the money that she raised is going to Tyrone United Methodist Camper ship fund.
Dalaine went to her schools Halloween party and a lot of kids were just in awe of her costume. When they were told that the vending machine actually dispensed candy and all the proceeds were going to be donated, they wanted to see how it worked and were excited to get a candy bar. So when someone put a dollar in the slot, Dalaine would grab the money and it would look like it slide in the money taker. If they put coins in the coins slot she would get them in her hand. So the child would then of course press the buttons. I would be asking the child so what kind of candy bar are you getting and they would say and then Dalaine would bend down in her machine, as she had a bag full of candy bars and then grab that bar and dispense the candy in a tray (picture the tray was where the skittles sign is) and the child would push the skittles sign and reach in a get it.
This costume was a talk of conversation every where we went. People took pictures, they laughed, and they were amazed. In all it was a very good time. In total we spent about $100 including the candy that was purchased to sell.