The Snack Machine Family
by Mikela

The Vending Machine and the Claw Machine
by Cynthia 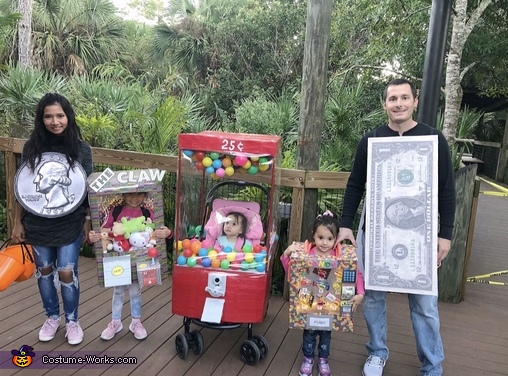 A word from Clinton, the 'Vending Machine Family' costume creator:

My wife and i have been designing our costumes every year since our first child, 5 years ago. Every year we pick a theme and start creating, this year it was vending machines. Since we had tons of boxes in the garage and we wanted to reuse them for something so we came up with the idea of making these costumes. Our oldest wanted to be a claw machine because she really loves this game. Then we chose the candy vending machine for our middle child. She loves candy more than anything else lol. The gum ball machine was just a natural fit for the baby since I could build around the stroller. We used boxes as the base for all the costumes. We also used many rolls of different styles of duct tapes and packing tapes. And for our mom&dad costume, we just choose to be the money as it very easy to make and it allowed us the most flexibility to handle the kids when go trick or treating.

To build the claw machine,we used cardboard boxes and pattern duct tapes. We taped the box then printed out the labels to put on the box.To make the claw we used some old electrical wire as it is very easy to make shapes and it holds them very well then we wrapped it with shiny silver duct tape. We made a little tray in the front to hold the stuff animals and put battery powered LEDs around the inside to make it glow at night. My wife then found this back straightener harness online the works pretty good for my daughter to wear the costume. We attached the straps to the box with zip ties. Last step was laying the stuff animals we had on the tray.

We kind of used the same method of boxes and used gummy bear pattern duct tape to make the candy vending machine. This costume was more like a cut out and wear instead of using straps to wear it, just didn't want the same look as the claw machine. We also used some LED light to light it up, great for when we walked at night. To hold the candy we used little slinkies to give that real vending machine look. We then inserted candies in between each slinkies and hot glued them together.

The biggest challenge was to build the gumball machine so that it could be put in the back of our SUV. Build the base so it could slip over the stroller and hook into some little studs on the stroller. Then we used some wooden rods paint red and form the top out of more cardboards. I hand sewn all the balls to a mesh bag to hang from the top. It really gives the allusion of the balls are floating. Hot glued the rest of the balloons on the cardboard then add the striped LED light around the front of the machine.

For all the kids costumes, we wrapped the outside with clear plastic wrap to make it look like glass window.

The quarter and the dollar bill were made from pictures we found online and printed out and glued to yet again more cardboards.

We went to three different Halloween events over a two day period. Every where we went, we got a lot of attentions also a lot of compliments. All in all the kids were so excited and enjoyed wearing them and so did we, mom and dad. We had a great time. It just leaves with yet another of great costumes to top!!