Ursula the Sea Witch
by Stephanie 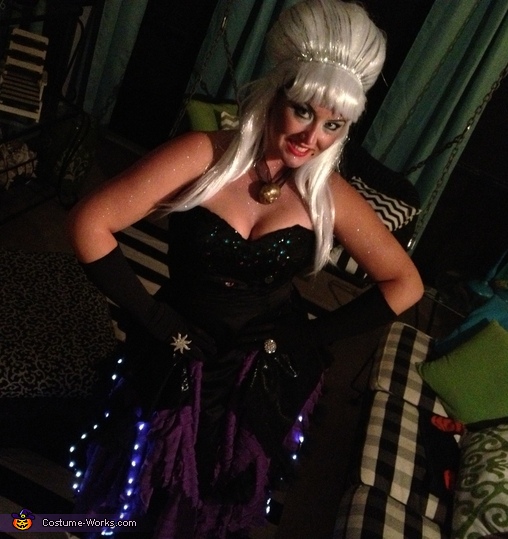 "Ursula" In Her Early Years

A word from Jordan, the 'Ursula' costume creator:

I decided to be "Ursula" from "The Little Mermaid" because I wanted to be a character not many people would think to dress up as. Im a college student, and most of the girls my age tend to go for the more "sexy" character for Halloween. I told my friends about my idea and they didn't think it would be very "cute." Little did they know, I was about to design a "Ursula Inspired" costume portraying the evil Sea Witch in her "Early Years." I handmade every detail of this costume with the help of my seamstress friend, Jen. The top of the ensemble is a black corset, embelished with jewel toned sequins, and the removable bustled skirt is made to give the illusion of "tentacles," with the help of 5 strands of battery powered LED lights sewn in. I decided to wear a lone white wig that also hinted to the "octopus" shape instead of the classic short spiky hair-do, like in the movie. My fellow girlfriends were shocked when they saw my take on Ursula! Totally didn't expect it to turn out like this! It took a total of 40 hours to make, but well worth it!