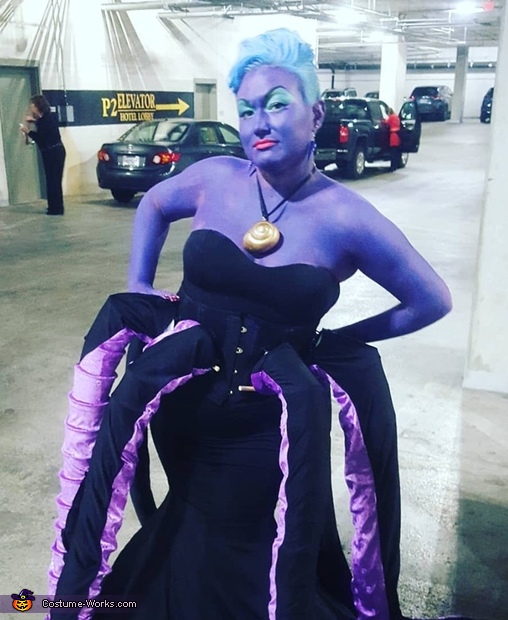 A word from Megan, the 'Ursula the Sea Witch' costume creator:

Megan sewed the dress and fabric covers for the tentacles herself using fabric from Joanns. She did all the hair and makeup herself, as well, using the Disney Ursula as inspiration.

Megan came up with the idea for a work sponsored Halloween ball with a theme of "heroes and villains." Knowing that Marvel characters would be the popular costume, Megan decided to create a costume of a villain from her childhood that she always loved, which was Ursula. She studied the Disney Ursula animation to get the make-up and accessories and looked at various cosplay and DIY sites to get inspiration on how to make moving tentacles that would be articulated and look snake-like.

To make the tentacles- Megan soldered holes in about 75 plastic cups and 75 plastic tree ornament bulbs (both obtained from amazon or any local store). She connected them using an elastic string- with a bulb inside of each cup, and tied the elastic tightly. She then soldered 4 equi-distant holes around the mouth of the cups to run the nylon cord through and left lots of slack at the end, so she could pull on the cords to make the tentacles move. The tentacles were attached to a waist cincher corset that Megan already had using bolts and wide washers.

The makeup is by mehron, and it is the Paradise powder Makeup in purple. Megan's hair is blue, so she sprayed some white temporary hair color to lighten the shade. The necklace and earrings were purchased on etsy.

Megan attended the ball with her husband, Matt, who dressed as King Triton using a store-bought costume with a few lights and modifications added.