Upside Down Scarecrow
by Terra

Upside Down Old Man
by Sue 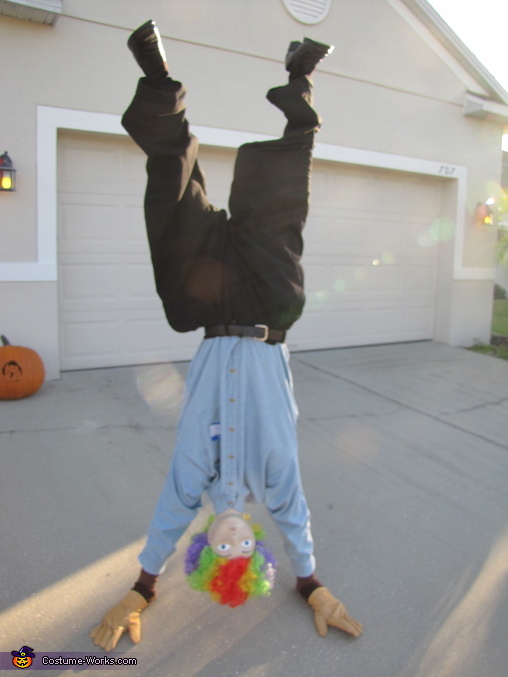 Upside down guy? I can walk on my hands!

A word from Eileen, the 'Upside Down Guy' costume creator:

This costume is worn by my 12 year old son. First we had to decide on what would be the head. While looking in the party and Halloween stores we noticed they sell the white mannequin heads by themselves. These are what they use to often put the masks on display with. For $1.07 we bought one of these heads. We later saw this type of styrofoam head at a local craft store too for a little bit more money. Then we bought craft paint the color of skin (like a light beige). We do lots of crafts so we already had some black, white, blue and red mixed with white for the rest of the face including the eyes, eyebrows and lips. Our niece is a little bit more artistic than we are and was visiting us for the week and took to painting the head to look as realistic as we could. Then for fun we decided to put a light up clown wig ton the head hat my husband's sister gave to us ( a friend had sent it to her for fun while she was going through chemotherapy). Any wig would work but be sure you can make it look real when hung upside down on the head. Straight pins to keep the hair close to the head would probably work if needed. Once the head was complete we went to work on the clothes. We figured black male khaki pants should work so we went to Goodwill to find a pair of pants large enough in the legs that when worn on my son's head, he could fit his head and one arm comfortably. Then my husband went to his closet and found an extra-large button down denim shirt with a collar. Any button down shirt would work but the collar is important when attaching the head and to make it more realisitc. We gathered other things form our drawers/closets including brown socks (to blend in with the brown and yellow work gloves we bought at a discount store), long black dress socks ( to be worn on his hands/arms) and slip on black dress shoes. We used a pair of suspenders as well to hod up the shirt from the bottom to be sure it didn't by accident come untucked from the pants while he moved around. You probably don't need the suspenders but you can by them at a place like Goodwill as well for $1. How to attach the head to the shirt? We had a pack of straight pins you use for sewing so we put the head in the collar, pulled it tight around the neck of the head in the back and attached the head into the collar with lots of straight pins under the fold of the collar so you wouldn't see them. We were very generous with the pins to be sure that head was not going to come out while walking around. My son put on the brown socks first and then put his legs into each of the arms of the shirt. We attached the suspenders to the top of the shirt to hold it up and on (this is actually attached to the bottom of the shirt but remember it is upside down). once the shirt with the head was attached and secure, we put the gloves onto the his feet over the socks ( like wearing gloves on your feet and attached the gloves with a safety pin to his socks. We had large gloves to cover his feet and also that could slip onto his feet. If you want to walk around a lot outside (like at a party or trick or treating) you can wear shoes on your feet and just attach the gloves onto the top of the shoes . We buttoned the sleeves on his ankles to also make it look like his wrist there. Next was time to put the pans on. With the pants facing forward we put one arm on the leg of the pants and the other leg he put his head and the other arm. Black dress socks on his hands/arms and then dress shoes on his hands for the feet. To secure the pants, we put a belt through the belt loops and belted it snuggly around his chest area after pulling it down over the shirt ( making it look like the shirt is tucked into the pants. My son surprisingly was able to see through the material of the pants during the day so we did not make slits for the eyes to see. If you are unable to see through the material of the pants, we suggest you make small slits for the eyes and cover them with tights material form the inside.
People of all ages LOVED this costume!!! The kids were so dumbfounded of how he could walk so well on his hands without falling. Everywhere he turned people were taking his picture. When he would clap his feet together or bend his legs down to the ground in front, people were surprised and intrigued. They also enjoyed him dancing with his feet in the air dancing.
The video of this costume was really entertaining and disturbing because it really does fool the eye into believing he is walking upside down. Just be sure the person wearing the costume can really see well so they don't fall. I gave my son the "how many fingers do I have up?" test to be sure he could see and he passed it easily. Happy Halloween!!