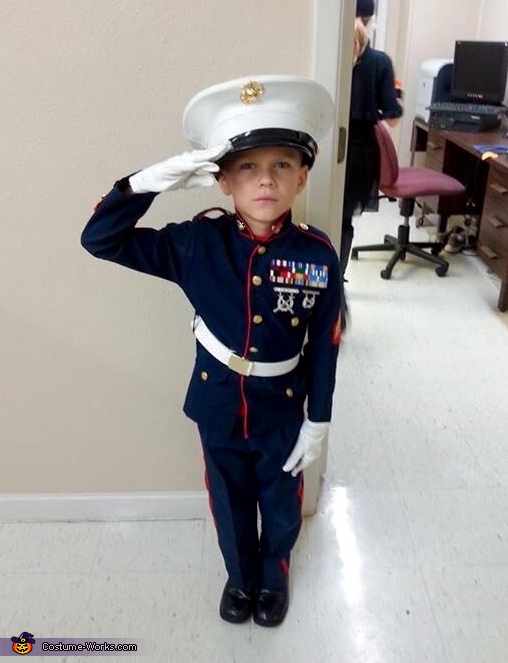 A word from Elena, the 'United States Marine' costume creator:

The United States Marine motto Semper Fidelis, latin meaning "Always Faithful" definitely fits this 8 year old!! My son Dallas is wearing the most recognized formal uniform in the military, the Marine Corps dress blues "b" bravo. I found this cute child's costume at a local store 4 years ago, knowing Dallas would love it, since his father is his hero and he wants to be just like dad! Yes, he has worn this costume for FOUR years in a row! Of course I had to hem the pants and sleeves to fit the first year and have slowly let the hem down as he has grown! He refuses to be anything other than a Marine for Halloween each year! This year is his "retirement" year (4th year of service)! Since he has just about out grown his favorite costume I just had to vamp this baby up to look more like the original, the one and only marine dress blues! The best part and most important part of the outfit is Dallas is wearing his fathers original cover aka "hat" with the gold Eagle Globe and Anchor insignia, meaning Air, Land and Sea!! We have added the gold marine eagle globe and anchor insignia's to the dress collar provided by his father whom is a marine, also added his fathers marksmanship badges, "rifle expert" and "pistol expert", and e-4 (corporal) badges on the sleeves! Along with used marine corps military ribbons which I found at a army surplus store. Ribbons on a marines uniform must be in correct order and these are and so are the patches and badges! This young 8 yr old sure has seen a lot of conflict ;)!! We also made the belt fit his little self after purchasing an adults size from the army surplus store. To complete the outfit I scoured thrift stores for black dress shoes and white gloves and FINALLY found ones close enough to match the originals! Of course we had to make the gold buttons a brighter gold with gold paint and starch the suit!! He was a sharp dressed mini Marine for sure! He will make a great Marine one day! OO-RAH

Overall cost would be around $50 to us PRICELESS