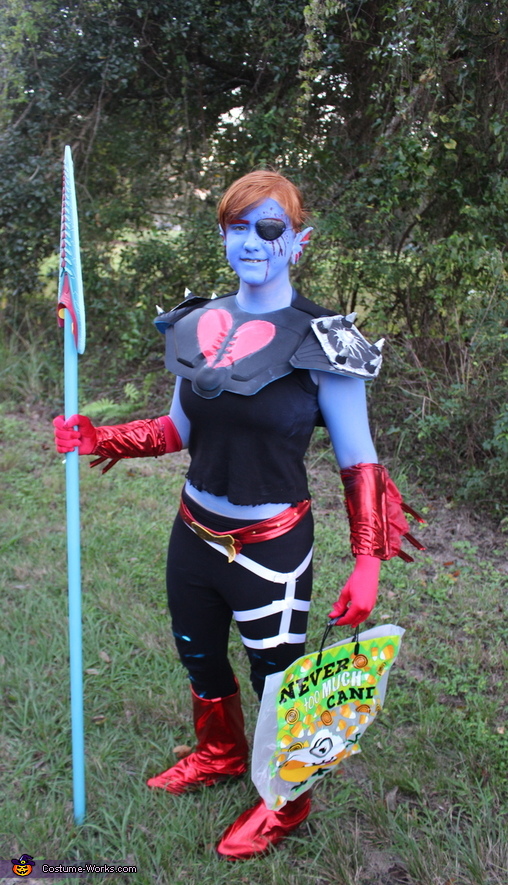 Ready to get candy

A word from Emma, the 'Underfell Undyne' costume creator:

Hi I am Emma I just turned 13 (Oct. 29) and this is my costume and I am the one wearing it. If you have to be 18 to win my mom, Melony Dillon is with me and that is her email address as I don't have one yet, but this was my project so I thought I should be the one to share it.
I choose this character as she is an awesome fighter and a strong female role as she is the Captain of the Royal Guard of monsters in in the game Underfell an alternative reality of the game Undertale. She is a blue fish monster with red hair. I made her armor out of an old ninja costumes top piece, altered the size and shape, sprayed it black and painted the broken heart on it, ps it also glows in the dark its a shame mom used the flash on the pics or you might could have seen it (I had some glow in the dark paint left over from another project and thought it would be cool). I used some of the material I cut off to make cones that I glued to the armor to make it look more like armor with spike. I then took a silver marker because that was what I had and gave it a worn metal look. I purchased cheap black pants and a basic black t-shirt (about $5 total) took a pair of scissors and jagged the edge of the tshirt so you could see a little belly and slit the pants. since I was going to be blue I used some scraps of blue material and sewed them behind the slits so it would appear to be blue shin underneath. To make the gloves and fins, I purchased the gloves on amazon for $7 and then bought some red material to cover balloons sticks from last years costume to make the bones that protrude out from the fins red material cost about was less than $4 total, I got a remnant love that because it is 50% less. I also had a little sheer red material that I used for the fins (in between the bones). Then I used some of the red material I bought to cover my granddads old cowboy boots, I made a pattern out of notebook paper and then when it was pretty good pinned it and cut the red material. I used pieces of elastic my grandma had in her sewing drawer and ran in along the top and bottom edges of the boots after I sewed the seams together and up the back of the boot. oh I also used the remainder of the red material to make a belt and I had an old foam flower that I cut to be the fish belt buckle. I used some gold glitter glue my mom had to decorate it with. I raided my moms ribbon drawer to make the bandages around her leg with and sewed them together. my character lost her eye in battle so I used a toy eye patch to cover the eye but not before I used face paint to cover all of the body that showed in blue and then red face paint to highlight my eyebrows so they didn't get lost in the paint, I used these paints because it is what I had in my face painting kit(but if I had to buy them it would have been about $6.88 to replace or buy). I also added some fake blood just a few drops to give the elusion my eye was bleeding or maybe had just been taken or I was in a good battle recently, etc. but mainly because I just got a bunch of it for my birthday and was eager to use it. The spear was made from an old knife, my mom cut the handle off and a piece of pvc that was left from another project. I bought some sealer at Hobby Lobby with a coupon so it only cost me about $4. I sprayed the blade and the pvc after I painted it (mixing whatever left over paint I had that would be close to the right color) I then glued the 2 pieces together. It came out awesome!!!!