Under the Sea
by Susan

Under the Sea
by Colleen

Under the Sea
by Becky

Under the Sea Costume 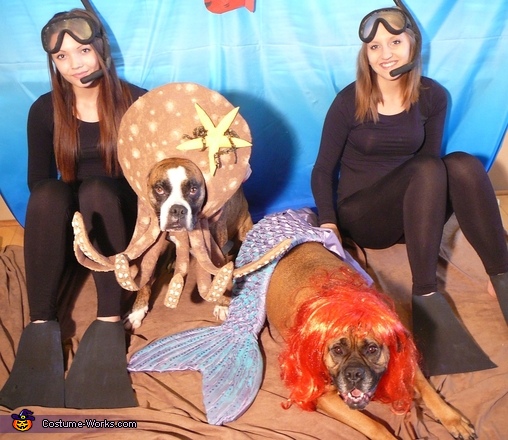 A word from Tracey, the 'Under the Sea' costume creator:

My dogs Libby and Sawyer are a big part of our family and although they don't get to go trick or treating, I make them a costume every year. They do get lots of treats for photo taking but this does turn on the drool taps :) This year I went a little crazy and made them three each. I also made matching costumes for my daughters.

Scuba Diver Costumes
I began with my daughters costumes. The diving suits were black leggings and long sleeved t-shirts that they already owned.
I made the flippers using craft foam. I cut out flipper shapes and added elastic at the back so they would slip over my daughter's feet.
I made the goggles using clear plastic and plumbing pipe insulation (foam strips) that I had cut into strips. BE SURE TO USE LOW TEMPERATURE HOT GLUE as high temperature will melt the foam and as I have discovered, you can burn yourself with the glue. I cut the goggle shape from the clear plastic and then glued the insulation on to it. I then added elastic to the sides. The snorkel was also made with the foam strips but I glued some wire inside of it so that it would be bend into the snorkel shape. I glued this onto the the side of the elastic, again using hot glue.

Octopus Dog Costume
I made the octopus head using the foam strips. I made the head by gluing strips together until I had a hollow oval type shape with the hole where my dogs head would fit through. Small clamps came in handy to speed up the process of gluing the foam strips together. Due to using the foam, this is extremely lightweight. I covered the entire thing in felt which I also hot glued on. I then painted on spots using acrylic paint. I made the starfish with the foam and also covered it in felt. After hot gluing it on, I added seaweed with some green fuzzy wool. The legs were made with plumbing insulation that was cut in half. I glued wire into the centers and then enclosed the half the tube with a piece of the foam from the other half, that had been cut in half again (quarter of original piece) I then used the tip of the glue gun to burn in the detail of the tentacles. I covered the top of the legs in the felt and painted more spots. The bottoms of the legs were painted. The foam does accept paint but it chips off fairly easily. I have found that the burned areas tend not to chip as easily but for long term use, I would cover all ares with fabric of some sort. My dog wore this costume for pictures only, so it sat nicely over his head but you could attach it with velcro to your dogs collar for stability. You could also make this entire head and legs with fabric and stuffing.

Mermaid Dog Costume
The mermaid tail was made with the foam strips and then covered with a lightweight fabric. I used hot glue to fit the fabric into the scales of the tail. I then glued on sequins. I made a skirt that fastened with velcro on to my dogs waist in the same fabric and the tail velroed on to the skirt. The shell bikini was made with the foam and covered in felt and detail painted on. I attached strips of felt from the bikini up around my dogs neck and strips that went under her arms and around her chest. The neck pieces were glued together, so the piece went over her head and then the chest piece velcroed together. I covered the felt in the same wool to look like seaweed. I finished with a wig I purchased at the dollar store but added a piece of elastic to it.