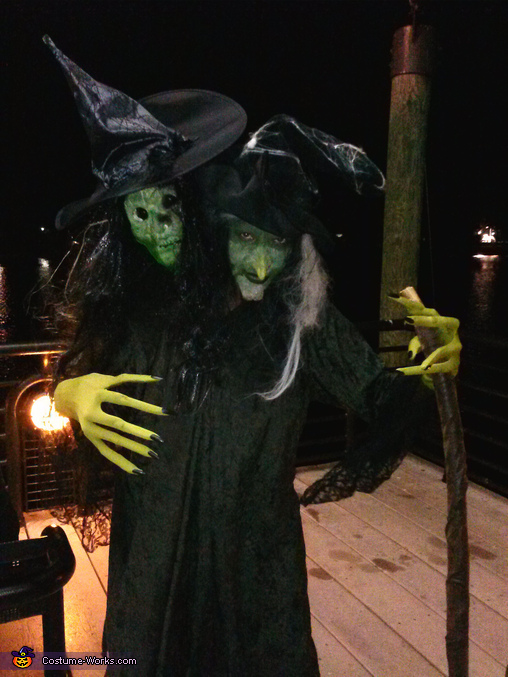 A word from Linda, the 'Two Headed Witch' costume creator:

I got this great idea to be a TWO HEADED witch by watching a story on TV about two sisters living as conjoined twins. I said to myself......"self, you and I would be the best sisters as a TWO HEADED WITCH for Halloween."


This costume was done a little at a time. I first started with the "additional" head. I used a WIG HEAD and a mask to get things started. I purchased some green eyes that light up and a voice box that makes the witch's "cackling" laugh. In order to get these 2 items to fit perfectly, I dug the white foam of the wig head out in the back then inserted the eyes and voice box so that the wires do not show. Next was the shoulder piece used to hold the additional head on my shoulder. I had to measure and trace my right shoulder to make a shoulder to place the additional head on. To make the shoulder I used INSULATION FOAM sealant.(this item is a Halloween costume maker's dream tool) I let it dry, carved out the shoulder, then placed the head. To keep the new shoulder and head to stay in place on me, I used Velcro which was attached to my clothing I was wearing under my costume. I also used the insulation foam to seal the mask onto the wig head. The rest of the costume was not as challenging. I hand sewed the witch dress. The hands you see are gloves stuffed at the tip with foam to give that "long fingers" look and I super glued the black fingernails to the tips of the gloves. The broom was made with a cinnamon broom (smells great), some brown leather fabric and the perfect stick I found while walking my dog. Shoes are from the 1980's..just can't throw them away and stockings were cut off a pair of tights. Last but not least is ME. On my face I used liquid LATEX and face paint and creativity. In certain areas I took the liquid latex to make bumps and sores by letting the latex slightly dry on a paper plate then attaching it all over my face in different areas. To bring them out I colored them a lighter shade of green mixed with yellow. The hair on the 2nd head is hair weave I had and on my head is a wig and hat I have had for years as you might be able to tell. Hat on the 2nd head is bought. Put this all together and you have a TWO HEADED WITCH.


The reactions I received were over whelming with admirers wanting and waiting (in line) to take pictures with me. As a matter of fact I was not able to actually "trick -or- treat" because I could not say "No" to all the attention I was receiving from kids as well as adults. This Halloween was by far one of the best ever, even without the candy. I am already thinking about next years costume. " I LOVE HALLOWEEN!"


This costume is definitely an ORIGINAL.