Troll On Your Back
by Will 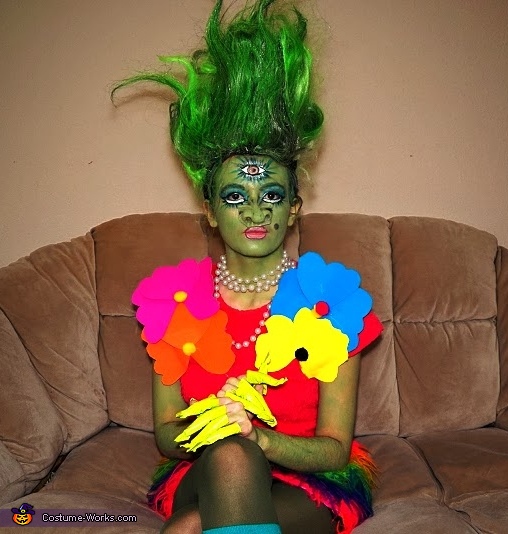 A word from Piper, the 'Troll St. Troll' costume creator:

This year I challenged myself to do a different and interesting DIY Halloween costume every day of the month. Everything had been going really wonderfully! I was making the coolest stuff on a very little budget and I was rocking this challenge. Given that I had to keep topping myself and finish off with the epic costume ever, I imagined that the troll costume from Party Monster would be absolutely perfect! It's such an elaborate and fun costume that many people immediately recognize from the movie! It was very hard to replicate, so I had to get really crafty! I went to Dollar tree and bought neon foam pads, furry ball buttons, and green duct tape. I made the flowers and hot glued them to a fuzzy pink shirt I had, then took an old wig and sprayed it green. Then I hot glued the hair to a slurpee cup to make it stand up on my head all night. Then I bought an old Halloween mask at a yard sale and cut out the nose to use as a prosthetic. I took green food coloring and liquid foundation and mixed them together for the body paint, and painted the third eye with some leftover craft paint. I spent the month deciding on it, a few weeks collecting items and conceptualizing the costume, and all day putting it together and finally was complete and totally awesome! Everyone was so proud of me for finishing off on such a vivid character, and I made it all myself! I posted a picture on Facebook and people freaked out. A lot of people agreed it was by far my best costume yet. Then I went to my friend's Halloween party and my friends were so excited for it! It was a lot of fun and by far the best Halloween I've ever had!