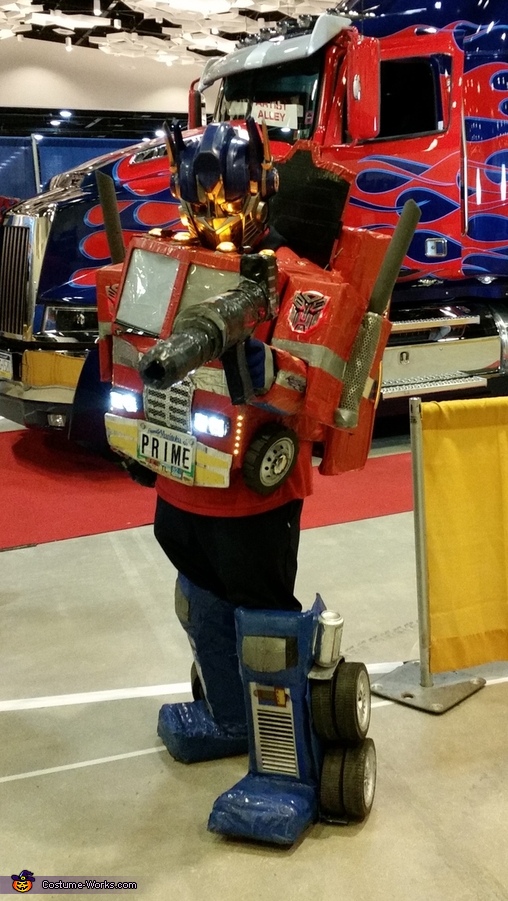 A word from Tony, the 'Transforming Optimus Prime' costume creator:

This is my home made Optimus Prime Transformers Halloween costume. This is based on the Cab Over Semi truck from the original Generation 1 (G1) 80's cartoon. My costume is detailed with several different items to make it unique, such as: the vanity Manitoba Licence plate, the windshield wipers, the working LED lights, the beer cans for the gas tanks, plastic wheels and more / too many to list. My costume consisting of several parts - body, forearms, and legs are made out of cardboard boxes and Duct Tape...lots and lots of Duct Tape. I do have some metal and wood bracing also, and used rubber boots on the inside for the legs. I do also have the trailer which I pull behind me like a wagon. I incorporated this to complete my costume as I transform from a robot into the semi truck. As far as I know online, I am the only transforming Optimus Prime costume with a trailer. The head is the only item bought as a voice changing helmet, but I customized it and incorporated blue neon lights to accent the eyes.
The Idea for my costume came from idolizing transformers when I was a kid back in the 80's. Especially none other than the leader for the good guys Optimus Prime. Now in my 30's, I feel like a kid again and a hero and superstar when I cosplay as Optimus Prime. My costume is cumbersome, hot, heavy and exhausting. But it is totally worth it to see and hear the reactions I get from kids and adults during the Halloween and Comic Con time of year. The costume started off just as a robot and looked a bit dorky and poor quality. Over time I have upgraded and customized it, and modified / engineered it by a lot of trial and error to where I can actually transform from a robot to a truck