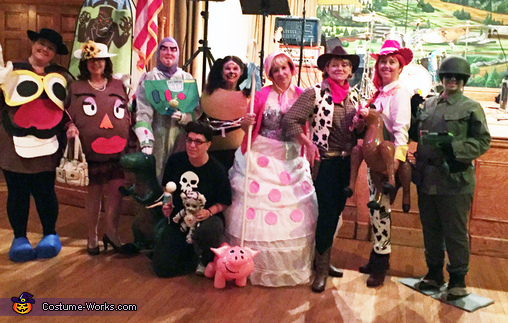 A word from Patty, the 'Toy Story' costume creator:

A group of 9 friends and family wore these Toy Story costumes to a Halloween dance. The idea came to me last year since we needed a theme with many characters. The costumes were 90% homemade (aside from a few purchased items in the costume store). I was Bo Peep - bought a hoop underskirt and added a white gauze skirt over it and made pink foam dots attached with velcro, along with thrift store clothing; Mr. and Mrs. Potato head were made from 4XL tshirts stuffed with cotton batting cinched with belts; we cut out foam pieces for the faces and Mr. Potato head's shoes. Buzz' costume was a surgical jumpsuit, the chest piece was made of foam forms glued together and attached velcro straps to the inflatable wings, which were store-bought along with his gloves and hood; we attached a thin flashlight on his glove to imitate the laser he shoots; Sid was just a man's wig cut short, gum foil wrapper for his braces, foam skull attached to black tshirt and dolls from the thrift store ripped apart and reattached. To make Woody and Jessie's cow-themed accessories, I bought a plain white vest from the thrift store and painted black splotches on it; for Jessie's chaps I bought white jeans, cut them up and painted black splotches - secured with velcro and duct tape around her legs; for Jessie's shirt, I bought a plain white shirt and painted the design, also threaded white shoelaces through her hat and used foam for the white ribbon on her hat; the soldier's uniform was from a thrift store and bought thin wood, painted it and secured to boots with velcro; Slinky was the most difficult: took 5 days to make using paper mache method over a medicine ball, painted and sealed, cut into semi circles, which slipped over her head and around her waist; the metal was a duct hose from Home Depot, her tail was made with duct hose wrapped around a floral form, glued to a plastic container, with a foam ball on the tip. I made paws out of foam covered with fur for her feet. We also added a few inflatables as props: Hamm the pig, Rex the dinosaur and Bullseye the horse.