Nightmare Before Christmas Sally
by Holly

Sally from Nightmare Before Christmas
by Brooke 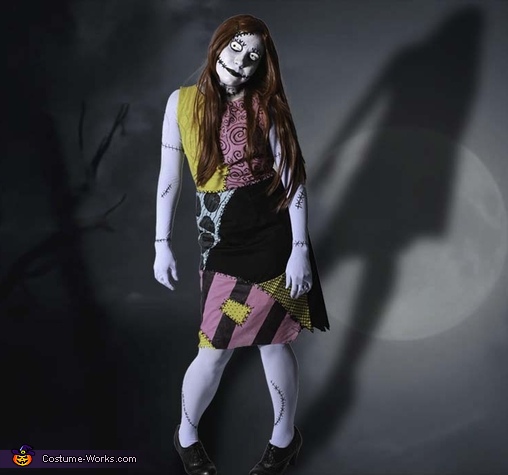 A word from Stephanie, the 'Tim Burton's Sally' costume creator:

We always have a themed Halloween party at work and we REALLY get into it! This year's theme was undead/living dead. And since I'm not very good a scary, I thought I'd do something cute. I immediately thought of Sally from the Nightmare Before Christmas because she is such a recognizable (undead) character and wouldn't require much explanation. Plus, her costume is simple yet very detailed.
Of the three categories we had for our in-house contest at work, I won two including Most Creative and Best Performance in Character. (Yes, I really did walk and talk like Sally ALL day long!) I walked away with a 2 laser printed certificates and bragging rights for the rest of the year. Woot!
Here's what I did:
I used 4 yards of lightweight cotton fabric (neon pink, bright yellow, sea green, and black) to create the dress. I cut and combined all of the patchwork pieces (using a template I cut out of white butcher paper) together before sewing the dress. Then using a basic sleeveless dress pattern, I cut and sewed the bodice and skirt pieces together. I used black fabric paint to (painfully) create the individual designs (circles, stripes, swirls, crosshatch, ...) on the patchwork pieces as well as to create the fake stitches holding the patches together. (There was a slight incident with my dog while doing this, let's just say it took an extra hour longer than I thought since I had to scrub the carpet and give my dog a bath.)

To mimic Sally's light blue skin tone, which I felt was absolutely necessary, I used 2 pairs of sky blue nylon tights for my legs and arms that I found online. The pair for my arms was a size smaller, sewn to create full-length, fingered gloves (using an online tutorial), with a hole in the crotch large enough to fit my head through. (Between the two pairs of tights I ended up with almost a full body suit which thankfully cut down on the need for body paint.) I again used black fabric paint on both pairs of tights to create Sally's ragdoll stitching holding together pieces of her arms and legs.

For my face, I used 3 tubes of colored cream body paint (white & blue mixed to match the tights, and black for the stitches and lips), blue eyeshadow (for shading around the eyes, nose, chin, and neck), and a dab of red lipstick (in the middle of my lips).

For her long beautiful hair, I used an 18" long red, anime wig (and wig cap) that I had to specially order from China. (Good thing I had this idea early as it took 3 1/2 weeks to arrive.) The wig was trimmed and styled to create a more flattering look.

And lastly, I used a pair of black oxford heels, that I dug from the back of my closet, to complete the look. (Okay, maybe I didn't dig them out, they're right in front cause they're really comfy and I like to wear them to work.)
The reactions I got:
The folks at work really liked the character. I was instantly recognized for Sally (even though most of my coworkers are older), which was nice because I hate having to explain a costume. (Is there anything worse?)
Most of my coworkers didn't believe that I actually made the dress and swore that it was a "real" dress. I explained how I did it and even showed them my slightly messy hems to prove it. They got a kick out of that.
I also got many comments on my makeup. Mostly good, although some were a little freaked out when I closed my eyelids, as they were painted as a second set of eyes. (Sally has large white eyes and small black pupils, no iris.)
I got a few strange looks while driving to work and walking my dogs that afternoon. I mean, how often do you see someone with bright red hair and blue skin, nonetheless driving to work or walking down the sidewalk with not one but two pugs. (I'm pretty sure I didn't cause any accidents. Though I didn't actually check the news.)
The best reaction I got was later in the day, when I picked up my kids from school, in full costume of course. (Why would I go home and change knowing that I'd have to put it all back on.) One little 6 yr old girl screamed upon seeing me walk through the front door. Then everyone, teachers and students alike, looked at me in unison and started making all kinds of noise. All the little girls said that they liked my costume and I received many compliments form both young and old. It was far more of a reaction than I expected and made me quite proud of my work.

Other thoughts:
Luckily my face paint didn't crack throughout the day, since it was cream makeup, but it did smear. I solved that by making excuses for my neck saying that I had an incident and had to stitch my head back on. That got a few laughs. I'm not sure which would have been worse, the cracking or smearing, but overall lasted throughout the day (from 5am to 10pm) and I brightened a few peoples' day.
It was a lot of work for what originally seemed a simple costume, but I'm glad I did it. I really liked it and I'll be keeping it in my closet in case I have another chance to wear it!