The Three little Pigs and the Big Bad Wolf
by Ashleigh

The Three Little Pigs
by Steph 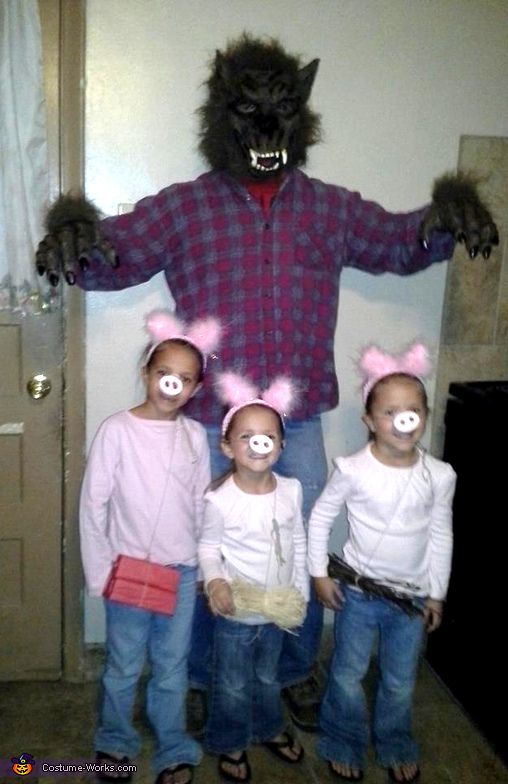 The Three Little Pigs and the Big Bad Wolf

As the Three Little Pigs we have sisters Kelly, Sylis, and Chloe Vasquez. As The Big Bad Wolf we have their dad, Gabe Vasquez. The costumes were fairly inexpensive and easy to make. For the ears of the pig I used feathers and a cloth head bands gluing them together with a hot glue gun. The outfits of the pigs were put together with a simple pair of blue jeans and a long sleeve shirt, which both are reusable. The noses of the pigs were made with paper towel rolls and pink Crayola foam clay; and yarn to tie around the head. I used several pink pip cleaners, twisted together and coiled for the tails of the pigs. For the props the pigs carried I found materials that went with each pigs theme in a craft store, tying them to the shoulders of the pigs with yarn. The bricks were made with red tissue paper and foam blocks. The wolfs outfit, for the most part, came from dads closet. A simple pair of blue jeans and a long sleeve flannel makes up the wolfs outfit. The mask and the hands of the wolf were purchased. The four outfits were made under the cost of $60, with the wolf's mask and hands costing the most at $25.