The Three Amigos
by Brian 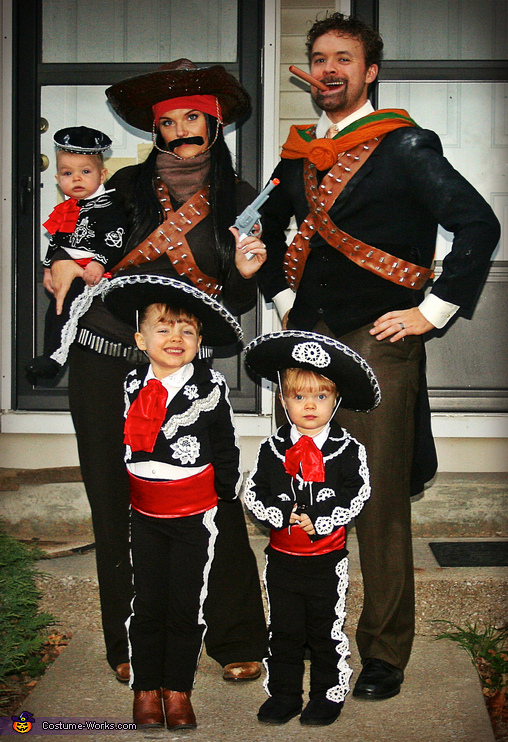 A word from Celeste, the 'Three Amigos Family' costume creator:

We decided to be the Three Amigos this year for Halloween for the following reasons:

1. We've developed a sort of tradition to have a family theme (last year's costume here)

2. Our 4-year old daughter wanted to be "Jessie the Cowgirl" from Toy Story (that's what she thought she was last year as well, she was unaware she was actually Ralphie from A Christmas Story), so we brainstormed a creative way for her to be Jessie and The Three Amigos is what we came up with

3. We're big fans of the movie- such a classic.

We were feeling some serious Pin-ressure (Pinterest pressure) for this year's costume (ours is the first costume to come up on a Pinterest search for "family Halloween costumes"), so we didn't want to disappoint. In fact, people were asking me what our family would be for Halloween all year long! I don't know if we lived up to our friends' and family's expectations or not, but our costumes were definitely well received at our church party. Everyone loved them and asked how we made them. Here's how:

The pants are just $4 yoga pants from Wal-mart. And the blazers are cotton girl blazers from eBay. I started with the intent of using boy suits, but they were just too bulky and I wanted them to be fitted. I cropped and hemmed the jackets to make them boleros. Oh, and the baby's is actually just a $2 black shirt from Wal-mart that I cut down the middle and hemmed up.

The "embroidery" for our oldest daughter is just parts of a lace-y tablecloth we got at GoodWill that we cut up and hot glued onto the costumes (verdict is still out as to whether or not it would have been faster just to sew it on). For our second-oldest we cut up a doily crocheted thing and hot glued that on. And for the baby, we used Puffy paint for his top, lace for his pants.

For the sashes, I just bought half a yard of shiny red fabric and sewed some sashes with Velcro. For the ties, I cut and sewed strips and Rich hot glued them so they would ruffle. Also, I made sure to get dress shirt bodysuits (I learned that "bodysuit" is what you call a "onesie" after a child is too old to wear onesies) for all the kids to avoid bunchy-ness and untucking-ness.

The girls' hats were $7 "adult" hats from eBay. I would be most disappointed in these had I bought them for myself, as an adult, but for the kids, they were perfect! (also our kids have abnormally large heads). And the baby's hat, also came from eBay, but from the dog department :)

As for the El Jefe and El Guapo costumes, we made our bandoliers by spray painting pasta silver and hot gluing them onto strips of fake leather fabric. I scored a perfect orange sweater the first time I went searching for one at GoodWill and my husband fabric painted the stripes green for El Guapo's infamous sweater gift. I also scored a ladies' blazer that I sewed into a tailsuit coat for my husband by cropping the front two panels and sewing them onto the back end.


For more pictures and details see our blog.

All in all, a very successful Halloween!