The Mad Hatter and The Queen of Hearts Costume 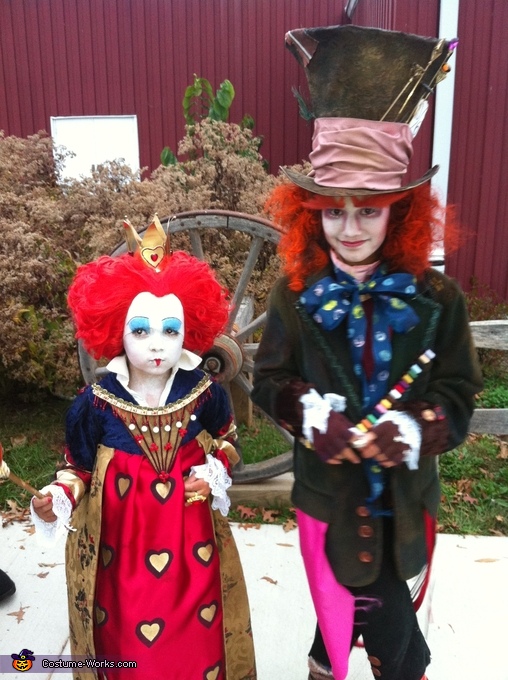 The Mad Hatter and The Queen of Hearts

A word from Elizabeth, the 'The Mad Hatter and The Queen of Hearts' costume creator:

Our two girls are wearing the Queen of Hearts and Mad Hatter costumes from Tim Burton's Alice in Wonderland. The Queen of hearts was made of curtains, fabric, and many jewels, lace, paint, and tulle. The curtain is the outer yellow layer of the dress, of which we made potato stamps to stamp the pattern into the fabric and then complemented the design with little red jewel hearts in between each. The middle section is red satin, of which we also made potato stamps to imprint each heart onto the fabric with gold and black paint. Next is the blue bodice and puffed sleeves which were sewn together and then had a handmade 'corset' placed over top. The corset consisted of cardboard, black lace, heart jewels, and a string of jewels attaching it to the dress. Her crown and scepter are also hand made with the wig being purchased and attached to a bald cap. The Mad Hatter started as a pair of pants and corduroy jacket from Goodwill. The pants received a dye job and pin striping done with spray paint of various colors to achieve the mad hatters multi color costume. The jacket also received a paint job as well as custom painted buttons and a hand painted dragon fly on the shoulder to mimic the original mad hatter. The gloves, tie, under vest, and thread sash were also home made to mimic the original costume. Eyebrows and hair were painted orange and teased to high heaven (for the hair) and attached and glued (for eyebrows). Last was the hat (of which took over a week to make in and of itself). Cardboard, wire, fabric, spray paint, lace, hatpins, and home made sash were all used in the making of this fantastic hat!!! Beware the judge that does not vote for these two, or as the Queen would say: "OFF WITH THEIR HEADS"!!!!!!!!