The Grinch Who Stole Christmas
by Cheryl

Grinch & Cindy Lou Who
by Evelyn

The Grinch and Cindy Lou Who
by Keri 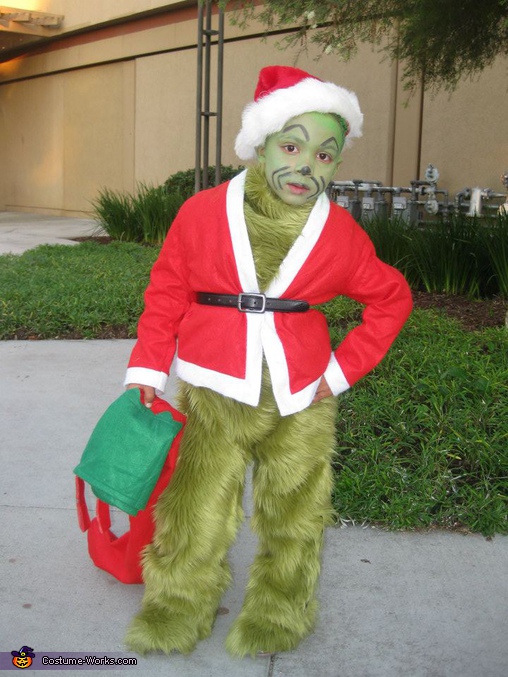 The Grinch who stole Christmas

A word from Tracey, the 'The Grinch' costume creator:

My 5 year old son is wearing the costume. He gave me the idea when I asked him who he wanted to be for halloween! Thank God he told me this in early September because there are no Grinch costumes you can purchase. I had to make this one with my own 2 hands! Please note, this is the FIRST time I have ever sewn anything....but I am happy with the results! So was my son. He got compliments everywhere we went and even had a handful of people ask for his picture. Did I mention he got TONS of extra candy for being so cute and original!

I made the costume by ordering 2 yeards of Long pile olive fur fabric online. Costs about 40.00. The I just grabbed an old pair of pants and cut the fabric the same size as the pants. I made it a jumpsuit, so I just grabbed a shirt to measure the legnth on how tall I should cut the fabric. I lefts hole for the arms since I knew the santa suit would cover his arms. I just used velcro at the top of the costume at the shoulders so he would be able to get in and out of the costume. The Santa suit was from Diaso store for only $5.00 and the hat was from the dollar store. The green face was just regular face paint from Target. We had a great night and I'm glad that I didnt give up when he said he wanted to be the Grinch. I think we will both remember this costume forever!