The Grinch and Cindy Lou Who
by Danielle

Mr. Grinch and Cindy Lou Who
by Mark

The Grinch and Cindy Lou Who
by Kaitlyn 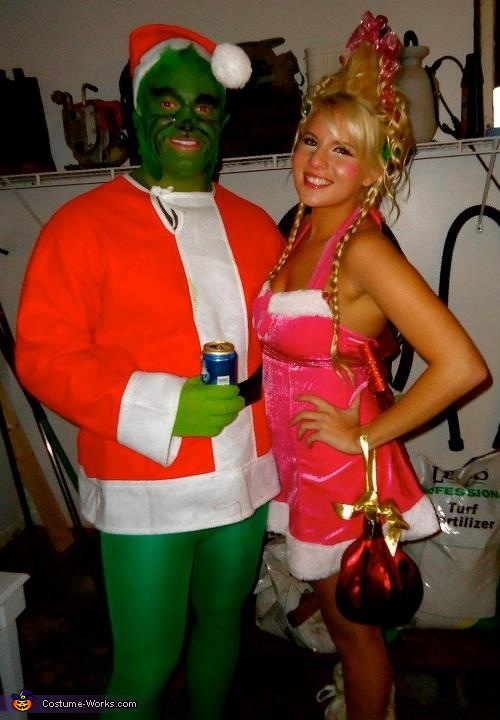 A word from Nina, the 'The Grinch and Cindy Lou Who' costume creator:

This is me and my boyfriend as Cindy Lou Who and the Grinch! I thought of the idea after watching the movie one night.

For The Grinch costume we bought large green tights and used a santa coat we had from Christmas along with the santa hat. For his hairy face i bought some furry fabric at Walmart and sprayed them with green hair spray, also from Walmart. I then cut them into side burns and eyebrows. We also used the green hair spray for his hair. For his face we bought a werewolf nose at the halloween store and used spirit gum to glue it on over his nose. Then on his neck and face we used green face paint all over (even on top of the fake nose) and then made it more detailed with black face paint. I then, used spirit gum to glue the green side burns and eyebrows on. For his hands we just used a pair of cheap green gloves.

For my costume (Cindy Lou Who) I bought a Mrs.Claus dress from christmas. I bought ribbon which i wrapped around me as a belt and also a jumbo sparkly bow that i looped through the ribbon to make the back side of my costume look more slimming. I wore tights and snow like white boots i had. I then sprayed myself from head to toe in glitter hair spray and bought a ornament purse at the halloween store to complete my look. For my tall hair i used a styrofoam cone from the craft store to serve as a the base to wrap my hair around. After i teased my hair obnoxiously i separated my hair into 3 parts and wrapped the middle section of my hair around the styrofoam while spaying it with hair spray and holding the cone. This part needed a extra person to help. I then tied my remaining hair at the top of the cone and curled those pieces. The two remaining chunks of hair i braided. Then i bobby pinned fluffy craft balls and jingly bells all over my head and curled all remaining pieces and sprayed with sparkle hair spray. For my face, i did my makeup as i normally did, then applied doll like, long fake eyelashes. I put light pink face paint on my nose and cheeks to look cold and who-like.

Over all i think our costumes came out pretty darn cool! It sounds like more work than it actually was and only cost us about $30 all together! So much fun to make and wear all night long!