The Wonders of the Deep Blue Sea Costume 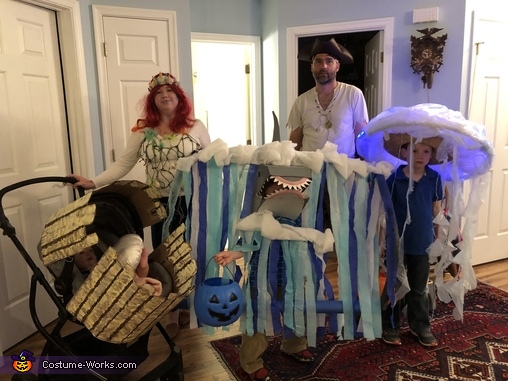 A word from Jessica, the 'The Wonders of the Deep Blue Sea' costume creator:

A mom had a dream . . . could she get her whole family costumed for under $60, and could they all agree on a theme? Well that dream came true and our family had fun with their Ocean themed do-it-yourself costumes. Mom and dad decided to go as a mermaid and pirate, our oldest son wanted to be a jellyfish. Our middle son loves sharks, but he did not want to just go as a shark, he wanted to be a shark coming out of a tidal wave. And since our youngest son was going to be in a stroller we decided to incorporate it into our costume—hence the baby pearl in a clamshell! Here’s how we did it;
Pirate—was able to get a pirate hat and a long red scarf at a thrift store for under $3. We took an old undershirt and cut it up to look pirate-y and added some twine for the drawstring at the collar. We used a black and yellow bandana from our kids dress up box to go with the hat and we had the plastic blade from a toy sword, but the handle had broken off so I cut one out of cardboard and painted it gold. I also did the same thing to make a belt buckle for the sash. For my husband’s old work boots I cut out 2 rectangles of black felt and sewed 2 buttons (all from old sewing and craft projects) each on them and pinned them to the top of the boots to make cuffs.
Mermaid—I bought some shiny fish scale leggings and a wig (about $20 total) and then made a crown out of an old plastic hair band and some shells bought at the dollar store. I hot glued gunned them to the band along with some of my kids old fish and seaweed figurines. I made a loose netting bodice with green and tan twine (I got some directions on youtube on how to tie them in a netlike pattern) and glue gunned some more of the kids’ plastic fish/seaweed/shells/fake gems on it. I did a little bit of make up on the cheeks to resemble fish scales by taking the plastic netting of an onion bag and stenciling it on.
Clam Shell and pearl—cut out 2 ribbed rectangular pieces of cardboard and painted them in mottled colors and attached them to the stroller with wire. For the pearl I bought a white satin pillowcase at the dollar store ($2) and cut out a circle, sewed and stuffed it. With the leftover satin I sewed a little cap for my son. I got an old pink fleece blanket at thrift store for $1 and cut out a sort of semi-circle to be the soft part of the clam.
Jellyfish—bought a hula hoop at the dollar store ($2) and a straw hat at the thrift store ($1) and some mini battery operated LED lights from Amazon (about $10). With wire I attached the hula hoop to the hat to make a large circle and then built a dome out of bubble wrap that I had in storage boxes in our basement. I taped the LED lights on top and then covered the whole dome with a couple of thin, translucent trash bags. I cut a couple more trash bags in a spiral shape and attached them to the underside of the brim with tape to make the tentacles.
Shark coming out of a tidal wave—I constructed the shark head and fin with cardboard and duct tape, painting it gray. For the teeth I took 2 paper plates and cut triangles into it, painting the gums pink. The eyes were 2 black buttons I glued onto the head. For the tidal wave I bought a couple of pool noodles and some different blue colored streamers for about $6 total and found some polyfill fluff for about $1 at the thrift store to make the foam on the crest of the wave. I wired the pool noodles together into a rectangular frame and duct taped the top of the shark head to the top noodle. Then I glued the streamers in long strips around the head, topping off with gluing the polyfill on the top noodle and around the head to resemble sea foam.
So for about $46 we were able to have a fun family themed costume event that involved everyone in the process and got some admiring compliments along the way. As well as candy. Lots and lots of candy.