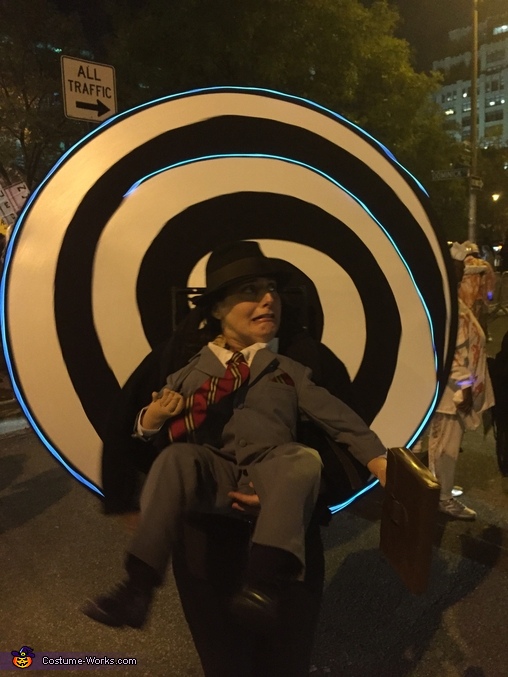 A word from Serra, the 'The Vertigo Complex' costume creator:

I am wearing this costume I created and named the Vertigo Complex. It's a spinning vortex illusion behind me and I am dressed as a little man falling backwards, wearing a suit and holding a briefcase.
The idea came to me when I recently watched the Mel Brooks film, High Anxiety, which was a wink to the Hitchcock classic film, Vertigo.
I built the man with foam, wire, pleather & foam core (the briefcase), and used at little 3T suit, toddler shoes and made fake arms with pillow stuffing and flesh colored spandex. I attached him to my body from the back of his chest as well as a flesh colored elastic loop around the collar of the suit that went around my neck - making it look like my head was his head. I also wore an old fedora.
I created the spinning spiral using a 52" photographer's collapsible reflector screen that I sewed in a black spandex spiral and white "EL" wire (which lights up). I put a grommit in its center and used a threaded rod with nuts, which attached to a aluminium backpack frame I wore that held it up. I used my hands, hidden behind my back, to spin the wheel.
This costume was a great illusion, super fun and dramatic, and was in the Greenwich Village Halloween Parade in New York City - the best Halloween parade in the world!