The Transformation of a Dragon Costume 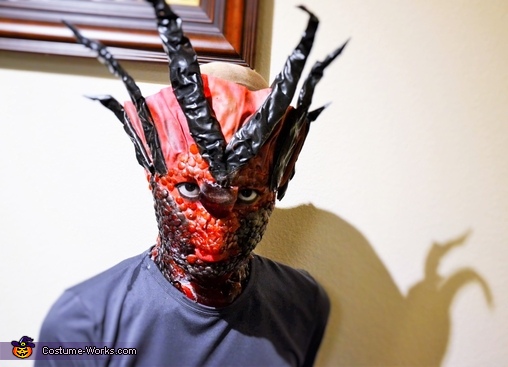 The Transformation of a Dragon Costume

A word from Ravenne, the 'The Transformation of a Dragon' costume creator:

I got this idea off a video by ellimacs sfx makeup on YouTube and decided to try it out. I wanted to improve myself from last year when I was an alien and this was a good step to practice more with prosthetics.
I followed the video and used gelatin, glycerol and water to make the scales.
Then, I took a syringe and used the melted mixture to make shapes like eye contacts.
I pieced them together with more gelatin and glued them to my face with liquid latex.
For the horns, I used aluminum foil and covered it with electric tape. I then bound them together with scrap pieces if latex.
The color of the scales are food coloring and generic Halloween makeup.

The process took a long time, (weeks to be exact), mostly because making there needed to be a ton of scales. A tip would be to only use unflavored gelatin, else other mixtures would not dry hard enough.

I had some great reactions to this;most people at the party thought it was a mask and I was also mistaken to be a boy several times.