Starbucks Barista and Frappuccino
by Jordan 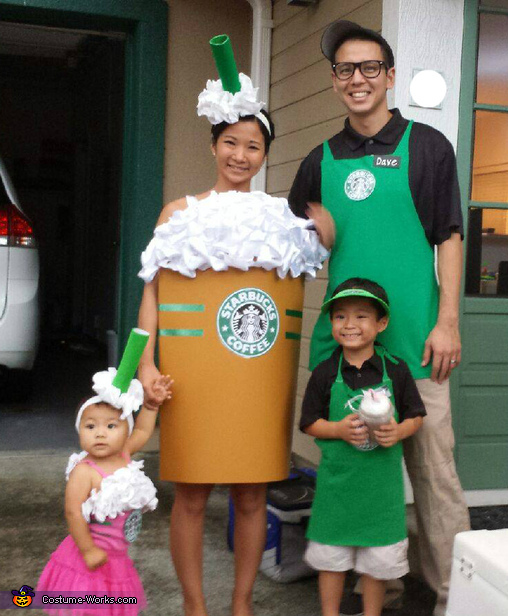 A word from Nicki, the 'The Starbucks Family' costume creator:

To me, a good costume is one that people recognize right off the bat. With that said, who doesn't love Starbucks?! This is a photo of me, my husband, 5 year old nephew, and 1.5 year old niece dressed up in a Starbucks theme. This was before my husband and I had children of our own, so I was excited to include my nephew and niece in this family costume idea!

At first, just me, my husband, and niece were going to dress up together. My nephew, being 5 and independent, wanted to initially dress up as Captain America. However, a few days before Halloween, we did a trial run with the Starbucks costumes. My nephew saw how much fun we were having, and immediately wanted to join our theme. That night, I whipped together a Starbucks Barista costume for him as well, and he wore that costume proudly!

My husband and nephew are Starbucks Baristas, I am a Caramel Frappuccino (my absolute favorite drink!), and my niece is a Strawberry Frappuccino (kid friendly drink). In making these costumes, my goal was to include as many details as accurately as possible. I actually researched the dress code for Starbucks Baristas, and studied the details on the Starbucks cups. The two baristas are set with their black collared shirts, khaki pants, hats, green aprons with the Starbucks logo, and even black name tags with their names written in white. My nephew is holding an actual Starbucks cup with pretend coffee (brown tissue paper) topped with whip cream (white ribbon) in it.

I bought many of the costume materials from our local Goodwill store. I made the green aprons out of an extra large green t-shirt. I do not sew, but that was not a problem; a glue gun became my best friend! My Caramel Frappuccino body was made out of two tan colored poster boards glued together. I embellished it with white ribbon for the whip cream, and added the Starbucks logo as you would see on an actual cup. My head piece replicates a straw with more whip cream. My niece is wearing a pink tutu skirt with a pink spaghetti strap onesie. I knew that a 1.5 year old would not be happy in a stiff cardboard outfit like I was willing to deal with, so I had to make sure that she would be comfortable in her costume, while accurately looking like a Strawberry Frappuccino. The backs to our Frappuccino "cups" also included a white strip with list of customization options, such as "Decaf," "Shots," Syrup," "Milk," "Custom," and "Drink"--- just as is printed on a real Starbucks cup.

That Halloween night, many people asked to take photos of our Starbucks Family, and some people even thought my husband worked at Starbucks (he is a nurse, haha!). I knew that in making these costumes ourselves, no one would have the same costumes as us, and we would be unique. A couple candy givers actually jokingly asked my nephew, one of the baristas, for a drink. He was prepared with the pretend coffee in the Starbucks cup that was strapped to his wrist! They were amazed that he was able to respond by "fulfilling" their request! It was a fun night! :)