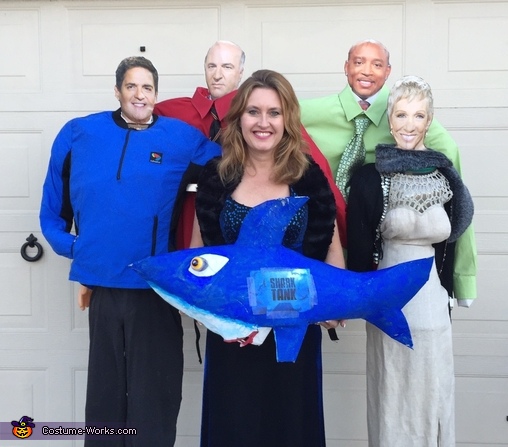 A word from Diana, the 'The Shark Tank TV Show' costume creator:

Here is my crazy halloween costume. I love watching the TV show " The Shark Tank" , so I decided to turn it into an original costume.

I was "the shark" and I dressed in a sparkly blue gown I found at a thrift store. I had to squeeze into it after sampling all the halloween candy. I carried a homemade paper mache and duct tape shark. I also fashioned it so it could be worn on my head for short periods at a time. It was so heavy by the time I was done with it, I think I shrunk a few inches by wearing it as a hat.

"Joining" me in the fun was the "cast" of The Shark Tank. I printed their heads from photos on the internet and padded their heads to make them look more realistic. I stuffed two baskets with bubble wrap to form their bodies. I raided my husbands closet to dress the men of the show and used my own clothes to dress Barbara, the real estate millonare on the show. The bodies were threaded through a metal bar and worn on my shoulders with the help of a shoulder strap from a golf bag.

The hot glue gun was my friend, although it was also my enemy.I burned myself several times in my rush to finish the project in time. I decided upon this costume idea only 48 hrs before Halloween . So as you can imagine this was quite the non stop production.

All in all , this was a labor intensive costume, but one that was not very expensive to make and was a kick in the pants to wear.