The Nightmare Before Christmas Costume 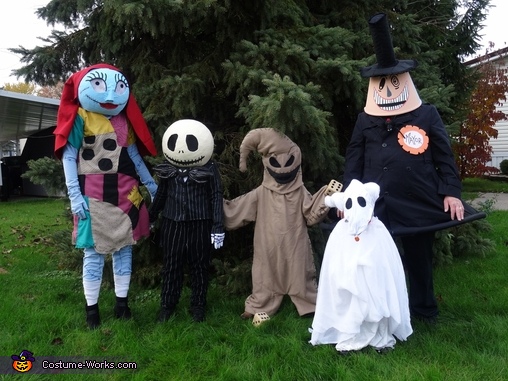 The Nightmare Before Christmas Costume

A word from Elizabeth, the 'The Nightmare Before Christmas' costume creator:

As most people know, this is my all-time favorite movie! This was my favorite year of creating family costumes so far! I put a lot of time, work & energy into creating these costumes. Everything I used was from resale shops minus the paint for the faces! I took it back to the first year of family costumes and made paper mache masks for Jack & Sally. I cut out & painted by hand. For the eyes & mouths I used white & black mesh in order to see & breathe, lol! For Zero: I took a woman's white sweatshirt and created Zero's head. The ears I cut from a leotard & stuffed. I got an old shear curtain that i cut in the middle to put over Joshua's head to create the ghost figure and cut up an old slip to cover his legs. In between the curtains I lined with battery operated lights and and also attached a pumpkin to the end of one strand for Zero's nose. The battery packs conveniently fit into the pockets of the sweatshirt I altered :) For Jack, I got a woman's 'skinny' blazer and an old pair of pants. I altered the jacket by adding fabric to make it a little wider and cut off the front of it so it hung down in the back like coat-tails. I then pinstriped the suit with a fabric marker. I hand cut out pieces to make the bat tie that Jack Skellington wears. I did cheat and buy the gloves. I have not perfected glove-making yet, lol! For Oogie Boogie, I found and old snuggie. I pinned it up and around .Sewed large snaps to create the right look. I sewed that hands shut as Ooogie Boogie doesn't have actual hands. I created 'legs' but made them lower. The hood I cut out free hand. Cut out the face and sewed black mesh for eyes and mouth. Attached to a winter skull cap from the $1 store so it would stand up. I sewed snaps on to keep it in place with the body of the costume. Added stuffing and sewed to plastic spiders hanging from the point of Oogie-Boogie's head. For The Mayor. I bought an old lampshade. My dad cut the metal out of the top of it. I painted the 'happy' face which was strictly for the 'correctness' of the character but Scott couldn't actually see out of it. For the mad/sad face, like the other 2 masks, I cut out the eyes and mouth and attached mesh. The Mayor's hat is actually 2 cloth placemats. I cut one in half and sewed together for the brim. The other placemat I rolled up and sewed together to create the cylinder part of the hat. Stuffed it and hand sewed a circle of black fabric on top to close it up. I made the Mayor's badge out of cardboard, duct tape & felt. The spider I had for his 'tie' was one I had from the $1 store with a broken leg. I fixed the leg by adding a skewer and duct taped it. Added the red marking to make it a black widow as it should be :) His jacket was resale, I altered it by cutting up the sides and adding fabric so it would flare out. I then cut apart 2 long foam pieces from a baby playmat I got for $3 resale and sewed them under the bottom of the coat. That made it flow out/flare. For Sally, I got a simple, plain, sleeveless black dress resale for $1. I then eyed and cut out pieces of fabric from curtains, sheets, tablecloths & pillowcases and attached them right onto the dress. It was pretty difficult. I tried it on multiple times to make sure it was right :) When all of the fabric was sewn on, I used a fabric marker to add the details to the dress. For my arms & legs & neck, I used a large pair of woman's pants I got resale for a few dollars. It was the perfect color for Sally's skin! If you know the movie, Sally is constantly sewing her arms/legs back on. That was literally me. Especially when my sewing machine broke in the final stretch. I had to stand and pin fabric on my body and hand sew everything!!! Very stressful!!! I then added the scars to her arms & legs with a fabric pen! The gloves were a bit tight that I made but I even used actually red nail polish and painted right on them! So many details it's hard to list everything! The cost of the costumes probably averages $20-$25/person. I really would have to sit down to calculate! Hope you all enjoy my craziness!!! Sally = Me. The Mayor is my husband Scott. Jack Skellington is Nathaniel my 9 year old son. Oogie Boogie is Theodore my 6 year old son. Zero is Joshua my 3 year old son :)