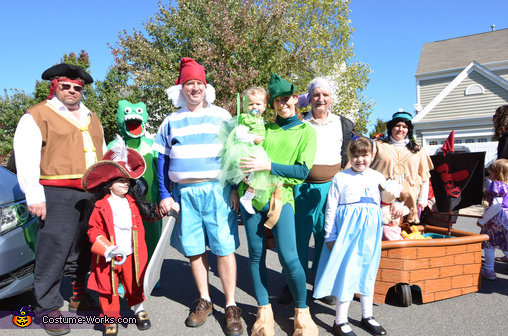 A word from Ashley, the 'The Neverland Gang' costume creator:

Since my son has thought he was a Pirate for most of his life now, we had to do a Captain Hook Halloween year! And with the help of my mother-in-law we went all in!

The characters in our crew included, Captain Hook, Tinkerbell, Wendy, Michael, Peter Pan, Mr. Smee, Tiger Lily, Tick Tock Crock (who was worn my mother-in-law!) and then we added Sharky and Bones as our two final pirates.

All of the costumes were either sewn or put together from clothes from yard sales or around the house. The captain hook coat was a red girls jacket which I added gold duct tape to for the trim as I did for his shoes. Tinkerbell's tutu I made with tulle and ribbon. Peter Pan's shirt and hat were cut out of felt and added to a new pair of green running tights. Mr. Smee's shirt we painted blue stripes on and added a pillow underneath for the extra girth.

My mother-in-law gets all the credit for sewing her amazing Tick-tock-crock costume and Wendy's dress my sis-in-law pulled together Michael and her Tiger Lily costume and the other pirates. Really was a team effort!

We had a blast and definitely rocked our local halloween parade in Never-land Style!