Barbara and Adam Maitland
by Christopher

The Maitlands Beetlejuice
by Lindsay

The Maitlands from Beetlejuice Costumes 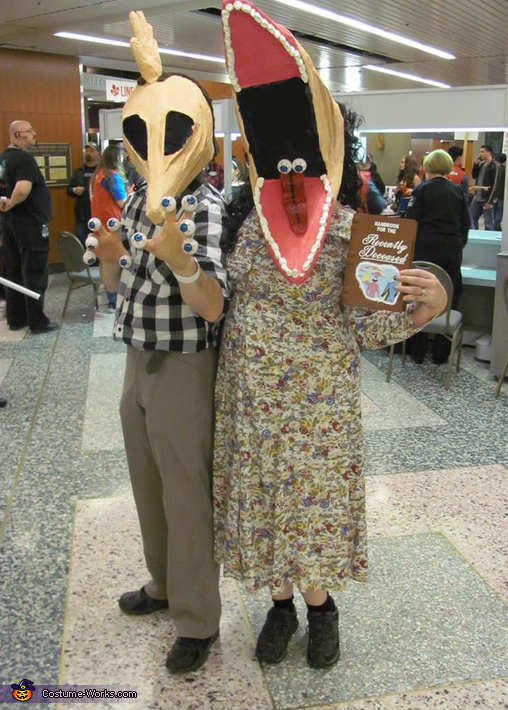 The Maitlands from Beetlejuice Costumes

A word from Taryn, the 'The Maitlands from Beetlejuice' costume creator:

This year, I gave my husband the task of choosing unique costumes for me to create. When he decided on Barbara and Adam Maitland from Beetlejuice, I was thrilled! I love that movie and also love the challenge of making an unconventional costume.

To make it, I build a rough skeleton of the head shapes with Craft board on top of two bicycle helmets. I then used wire mesh to build the shape of the mouths (I wanted these heads to be as light weight as possible so this was the best option). I then covered the skeleton with paper mache and then fabric mache. To hide our faces within the costumes, I hot glued stretched out nylons over the mouth and eye areas. I then created a tongue and hand from paper mache and then hot glued it to the heads. After the paint job, I attached the eyeballs to the tongue and hot glued on the hair to both wigs. My husband drilled holes in the eyeballs he wore on his fingers.

For an added touch, I made the Handbook for the Recently Deceased from a store bough paper mache book box. After a paint job, I simply pasted on the picture from the movie onto the book and voila! The great thing about the book was that it was hollow so I could keep things in it like my car keys :)