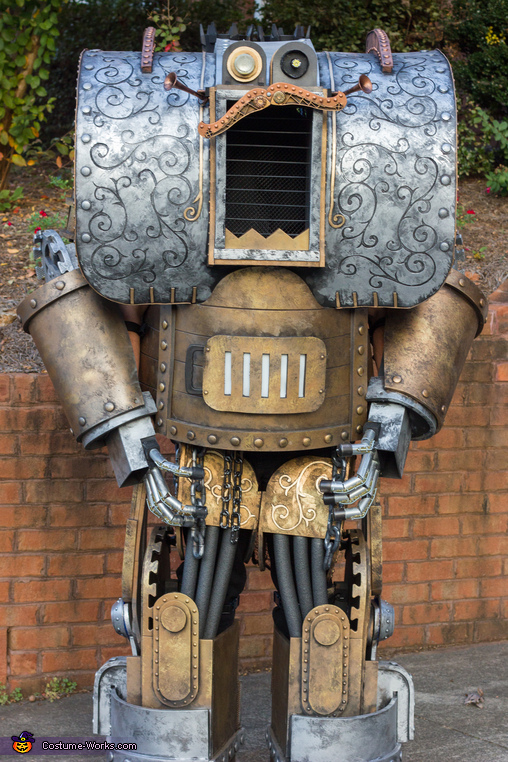 A word from Alissa, the 'The Luggernaught' costume creator:

My husband, John, made this costume. He describes how he came up with the idea here: The underlying concept for The Luggernaught, a study in Steampunk, has tumbled about in my head for a number of years. Between work and the raising of our children, there isn’t much time left in the margins. But this year mustered a particular focus and determination that carried the day, even though it led me to work late into the night on many occasions. It was just too much fun.

The initial spark came from a video on Etsy that offered to sell a brilliant pair of mechanical hands. I was fascinated by the beauty of their functionality and the way the metal fingers mirrored the wearer’s hands.

I had toyed with the idea of making a costume for a while, but these hands truly captivated me. After pondering the engineering behind them (and watching the video about a hundred times), I set about attempting to make my own pair. While they were not nearly so elegant, they did achieve a measure of the same functionality. Inadvertently, the materials used in my version serendipitously lent the hands a Steampunk flavor. This set the stage. They seemed the perfect preamble to a full rendition of the retro-futurist style’s aesthetic — and I’m a sucker for steam-puffing giant robots. Who isn’t?

Now that a direction was determined, the rest was straight-forward (but very time-consuming). Steampunk, a movement born from the writings of famous authors such as Jules Verne and H.G. Wells, has an incredibly rich visual style, with many examples to be found online and in popular culture by true enthusiasts. While not a great plot in and of itself, the creative direction in Will Smith’s movie remake, Wild Wild West, is an excellent example. My hope was that the final costume would evoke the impression of heavy steel and brass molted together with antiquated technology, including steam piping, rivets, and interlocking cogs.

Despite wanting my robot to have a certain amount of intimidation, my hope was to counter it with a playfulness that was true to the Steampunk theme. This led to details such as the metal moustache that swings just below the eyes. The viewer’s left eye is intended to emulate a monocle that stuffy gentlemen from the Victorian age were prone to wear. The arms include a sort of cuff in the design. I feel like these details, paired with comical proportions in the shoulders and forearms (think Popeye), creates the correct balance between amusement and menace. I hope you think so too.

Here, he describes what materials he used to make it:
The Luggernaught is made from a large variety of materials. It ranges from PVC and EVA foam to wood and Styrofoam insulation, and more. There’s even an old pair of shoes thrown in for good measure.

The process included the building of an underlying frame structure for the torso, made of PVC piping and joints. I have a hilarious memory of being in an Ace Hardware store, treating their PVC selection like a Lego box. A “Helpful Hardware Man” walked up to ask if I needed assistance. After taking a quick look at what I was assembling, however, he retreated and said, “I don’t think I can help you.”

This PVC skeleton arced over my shoulders and head and wrapped around my waist. Once the structure was determined, I glued it together and then painted it black. Then, sheets of EVA foam were added. This is primarily available in the form of interlocking floor tiles used in play mats and gym flooring. After watching several instruction videos by cosplay enthusiasts, I learned how this material can be molded and painted with a convincing finish. Googly Eyes from a local craft store can be glued to the foam, and with a coat of paint, they’re indistinguishable from metal rivets. In addition to the EVA foam, Styrofoam insulation was used. While it is harder to paint, it provides more structural stability when it’s needed. For painting, the Styrofoam needed to be brush painted first with a primer, as aerosol sprays have an acidic effect on the material.

The paint itself started with a coating with Plasti-Dip, a rubber spray that seals the foam. Then metallic sprays can be ragged on to create the impression of old, battered metal. With the Steampunk theme, my metal choices were steel (silver) and brass/bronze.

The torso includes a stove belly in keeping with Steampunk. It was designed to include slots with translucent windows, so as to allow me to insert glow sticks at show time. This gives the sense of a coal-fired blaze within.

The eyes are plexi tubes, painted to look as though they’re metal cylinders. The braces that hold them were cut so as to allow the insertion of battery-powered lights – hence the eerie glowing eyes that the final costume boasts in the dark.

As mentioned before, the arms were the first to be built. They were also the most complicated component by far. Each finger includes three segments, or digits, of PVC that are connected with metal hinges. The connection points are rigged with springs to insure that the fingers spring back to a straight position when not being flexed. Running down inside each PVC finger is a steel wire coil that ends in a loop that I can pull with a corresponding flesh finger to make the robot’s hand move. This mechanism took my limited capacity a very long time to engineer.

In any case, each finger is mounted to a wooden frame that includes straps to hold to my arm. The arm is then skinned with EVA foam and painted to look like old metal. The cog wheels that you see in the pictures is also made from EVA foam. While the final result looks very heavy, it’s actually very light. Once strapped on, the forearms clip to upper arms tied to the torso, made from additional PVC. This connection is accomplished with a carabiner clip.

Finally, the boots required their own measure of engineering. They actually constitute the heaviest part of the costume. After watching several videos about the construction of stilts, I created an underlying wooden frame that included 2 x 6 boards boosting the bottom by six inches. The base of the frame forms a platform for an old, comfy pair of shoes usually reserved for mowing the lawn. These are actually screwed into the wood base. The frame also includes a pole that rises up to strap to my upper shin. Once I confirmed that this was stable, I proceeded to cover it with additional EVA foam, sculpting it into a Steampunk pattern.

The legs of the costume include a connecting piece, also made of EVA foam, that spans up to hook to the torso. This offers more continuity in the design.