The Little Mermaid Crew
by Yael

The Little Mermaid
by Tabitha

The Little Mermaid
by Jennifer 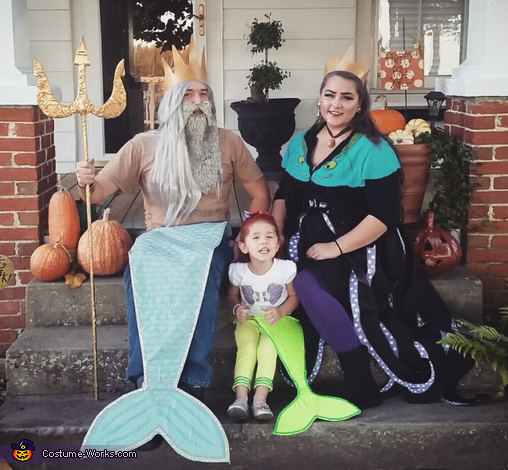 A word from Chelsea, the 'The Little Mermaid Crew' costume creator:

Ariel,daughter: Painted shells on white shirt then used hot glue to line with sequins and pearls (2 of the pearls popped off while she was wearing it but it held up pretty good considering it was on a toddler) Tail was made from bathing suit I found for $2. Cut the bottom of fin shape on cardboard and used hot glue to "hem" edges and add ric rac then put some tulle at the top to tie around her waist. It twirled and got twisted when she walked so I used my trusty hot glue to reinforce it with some poster board on the back, problem solved. Hot glued ric rac to her pants legs just to jazz them up a little a match the tail. I started with a red sequin bow and added purple ribbon, ric rac, and pearls, then topped it off with a shiny "dinglehopper". She had the silver shoes so I just painted a small flouder and sebastian and glued them on top.

King Triton, Dad: Painted abs on shirt. Made tail from old pillow case I cut up. Used cardboard for the bottom of fin and ribbon at top to tie like Ariels. Painted with silver glitter paint and added gold scales( The paint made it stiff enough that it didn't need any poster board on the back). Added ric rac. Crown made from poster board and paint. Trident made from curtain rod, card board and gold duct tape. Cut up fur lining in old hoodie to make beard. Cuffs made from glitter paper. Bought the wig at dollar general for $4.

Ursula,Mom: Had a dress and tutu. I used a old curtain to cut out 8 legs and paint tentacles (I was using up a lot of my paint so I decided to put a layer of modge podge first then paint over it when it dried. This worked so much better, it didn't just go through the fabric.) Ran ribbon through and wore like a belt. Cut old shirt to make Flotsam and Jetsam shawl. Painted their faces on. Painted shell and ribbon to make necklace. Painted shells for earrings. Crown was made like Tritons.

I bought some red and grey hair paint, king tritons wig, and the $2 swimsuit. Everything else I already had around the house or stashed in my craft room. I spent about $10 for all 3 costumes!