Link from The Legend of Zelda
by Sara

Link and Zelda
by Tessara

Link and Princess Zelda
by Eva

The Legend of Zelda Link Costume 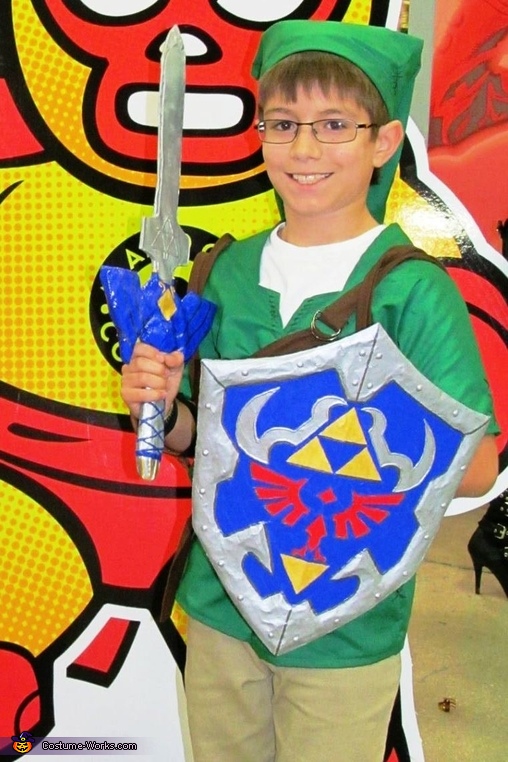 A word from Stephanie, the 'The Legend of Zelda Link' costume creator:

I’m a super nerdy 28 year old Computer Scientist and until about a month ago, I’d never been to a comic convention. Dead set on attending one before I got “too old” to do so, I went and bought tickets for the whole family. (Because if momma’s gonna go, we’re all gonna go.) And if you know anything about me (which of course you don’t otherwise I wouldn’t be telling you) you’d know that for me, anytime is a good time to dress up.

So I decided on a costume for myself (which I inevitably didn’t get to make due to lack of spare time) and asked my two kids what they wanted to be. My daughter, sweet little whovian that she is, immediately said she wanted to be a Dalek (no surprise there) and began threatening me with extermination. My son responded with an “hmmm” and a scratching of his chin. This lasted for several days while I planned the rest of our costumes.

After a few days of binging on Zelda, the obvious hit him, he was going as Link. So as the wonderful mom that I am, I immediately began working on his costume (while I left my engineer husband in charge of the Dalek, it only made sense), props and all (except the pants, I was really quite busy and barely got this done).

Anyways, to the costume:
Using an online tutorial and 1 ½ yards of lightweight green cotton fabric, I created Link’s tunic shirt. Using my desired length and width, I cut the fabric into 4 even rectangles, and sewed them into two sets of long rectangles. I then connected the large rectangles, from end to end minus a 10 inch section in the middle, to create the middle seam. As this point it looked like a pancho with a triangle shaped head hole. Next, I stitched together the large rectangles on the sides, minus 10 inches in the middle again, to create the side seams and armholes. At this point the tunic shirt is complete, though it contained some rough edges.

To clean up the tunic shirt, and add some character to it, I hemmed the bottom, armholes, and neck hole. And since the v-neck didn’t quite fit the character, I opted to cut both the front and back of the neck hole to create the square neckline that Link’s has before hemming. To finish the tunic shirt and add a more handmade look to the costume, I hand-stitched some “Xs” into the sleeves, sides, and around the entire neckline.

And since he couldn’t be Link without his signature hat, I made one of those as well. Using some of the same green fabric, I cut out 2 large triangles, stitched them together, and included an elastic band (which meant another trip to the store since I forgot it). I finished the hat off with the same “X” detail I included on the tunic shirt.

It turns out that a green shirt and a green Santa hat do not make a complete Link costume, as my son informed me. So, I went back to the store, grabbed some brown fabric and set to work making two boot covers and several straps with loops and buckles to complete the look (which simultaneously hid his sneakers and secured his weapons). *(I also made a simple drawstring backpack with the leftover brown fabric since I didn’t feel like carrying all of his stuff around the con as well as a set of bracers out of spray-painted craft foam and velcro.)

And since once again a green shirt, green hat, brown “boots”, and brown straps do not make a complete Link costume (and since I’d already made one too many trips to the store) I set to work making his Legendary sword and shield. (See why this momma ran out of time to make her own costume?!)

Using a thin cardboard base (from 12 pack soda boxes) in the necessary shapes (sword, shield) I papier-mâchéd several layers of white printer paper, coated them with a water-resistant sealer, and meticulously hand painted on the requisite details necessary for legendary status. And since I knew he would get tired of carrying them around all day, I attached several loops to his straps, backpack, and shield in order to secure everything to his back! (Genius.)
By this point, I was tired and we’d basically run out of time so I gave in and bought the khaki pants.

In the end, everyone seemed to really like the costume, especially him, and we all had a good time at the con in costume. As painful as it was on both my patience and my pocketbook, I’d gladly do it again. He had such a good time and I was proud that I’d not only completed the costume but done so much of it myself.