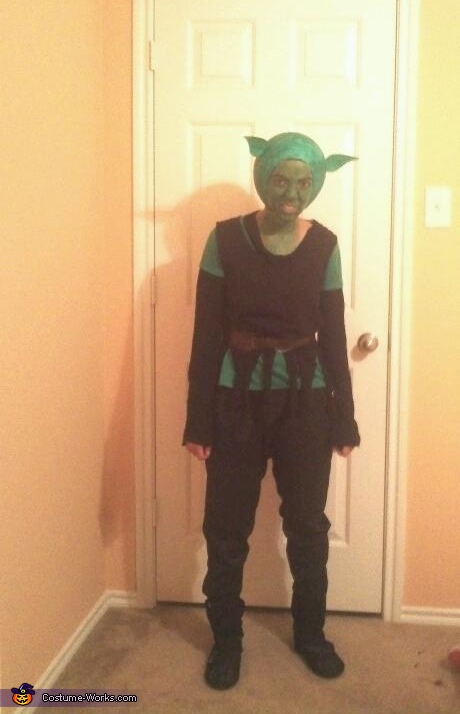 The Green Gobling of Paper Mache

A word from Sal, the 'The Green Gobling' costume creator:

How I got the idea:
Halloween has always been my favorite holiday. I love scary movies (although I never get scared of them) and I love the concept of free candy, who doesn’t? Every year I am the only one who gets really excited about Halloween even though its months away. I usually start planning my costume from the end of august. I originally wanted to be an Orc for Halloween this year. I came across this decision while I was forced to watch The Hobbit: Desolation of Smaug by my little brother. Although I was a little skeptic about the movie I ended up enjoying it and also got a great Halloween costume idea. Near the end of September I had to move and after the move I realized that I didn’t have enough time to create the whole Orc costume which would be time consuming. I started searching for another idea and I soon came across a goblin. I was never a goblin before but somehow this costume idea seemed a lot more do-able with the limited time I had than the Orc costume.
How I made it:
I started off by looking at how to make a bald cap because I knew that I wanted to join a DIY costume contest for the first time this year. I watched a couple of youtube videos and saw that you are suppose to put latex on a balloon to create the bald cap. This reminded me of paper mache and I decided that I could make the goblins head out of paper mache. I bought everything I needed to begin creating “The Goblin”. I simply blew up a balloon and measured its size in the mirror to ensure that it was close to the size of my head. I took Elmer’s glue and added water to it because I was too lazy to make paper mache glue and I started placing glue and lined strips of paper on the balloon. I did three layers of paper because I did not want the head to be too heavy and after I was done I let it dry. I should have used plain paper but I could not find it but it didn’t do too much harm to the costume. After it was dry I painted the entire paper mache balloon green with poster paint. After it was dry I popped the balloon and removed it and I cut out a rectangle for where the face would be. I placed that rectangle aside and from here it was trial and error to get the perfect shape for my face. I placed the head on and sketched with a pencil the parts that needed to be removed. After I got the shape of the head I went back to that rectangle piece of the head that I cut off earlier and I sketched out two goblin shaped ears and cut them out. Next, I cut thin slits in the paper mache head and I stuck the ears in them. For the rest of the costume, I already had a short sleeve green shirt and I decided to wear a long sleeve black shirt inside because it was cold on Halloween night. I bought an XXL v-neck from Wal-Mart for $3 and I cut off the sleeves to make it a tank top and I cut off triangle slits at the bottom to give it a peasant or dirty goblin look. With the triangle pieces I tied them together to create a string and I tied those to an old pair of worn out boots. I put this piece over the green shirt and I put a brown belt around it. For the bottom I wore a pair of black harem pants and I rubbed brown floral foam on them to give it the mud/ dirt effect. For my face I first glued down my eyebrows with a glue stick and then I put foundation on them to hide them. I painted my entire face (including my lips), neck and hands (the hand paint came off fast) green using a face paint kit from Wal-Mart. I drew my eyebrows into an angry arc using balck and I put black lines all over my face and blended it in. I drew dark black line from my nose to my mouth since goblins always have an angry face. The overall cost of the costume was about $10.
Reactions:
As I walked up to the driveways most of the people who were handing out candy outside already started saying things like, “Woah!! What are you” or “That looks so sick”. A few people didn’t really know what I was so I explained to them that I was a goblin. Many people thought I was Shrek and I understand because the clothing does look like Shrek and also a goblin but the ears are not quite the same. This made me realize that this costume is 2-in-1!! It could also be a Shrek costume if I change the shape of the ears and just paint my face a little lighter green shade. Almost everyone said that it was the best costume they’d seen all night so I guess the hard work payed off and because of this they put a little extra candy in my bag. Hehe! Someone asked me if I made the head and I proudly said yes and they were just amazed. I did not expect such a positive reaction if anything I thought my costume was average but everyone seemed to love it. I had so much fun creating the costume and I am definitely going to create another one next year. I love Halloween it’s the one day in a year where you can be anything you want and there is no judgment, if only the world was always like that. Anyway, that was my story I hope you enjoyed reading it and Happy Halloween!!