The Shining
by Amanda

The Shining Twins
by Katherine 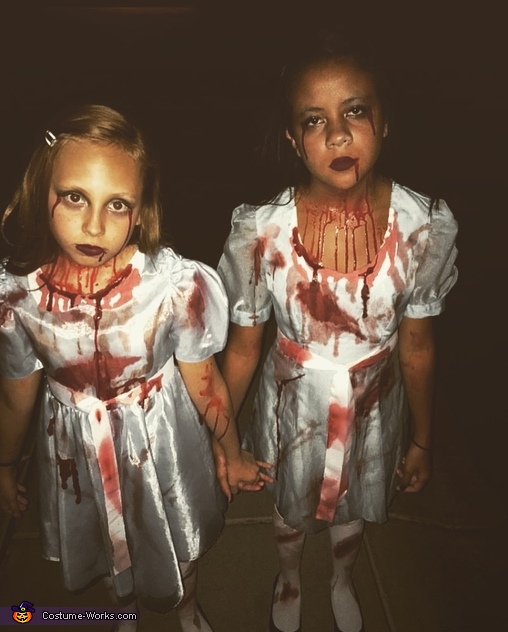 A word from Jani, the 'The Grady Twins' costume creator:

My 12 year old daughter, Simone and her friend Adrianna are the Grady twins from The Shining. Simone and I went to Goodwill at the end of August and noticed Halloween merchandise was out. We love to look at the different costumes. She saw a blue satiny girl's dress. It was like one she had when she was 3 or 4. She decided she wanted to be a creepy doll for Halloween. Her friend asked if she wanted to dress up together and Simone told her what her plan was. Her friend wanted to get a dress similar and then they came up with the idea to be the Grady twins. We didn't know how to get the same dress, so we knew we had to be creative. I went back to Goodwill. There was another light blue dress, but it was a gown with ribbon and pearl accents all over it. We had our minds set on these costumes so we bought it. The first dress was $9.99, the second was $6.99. The girls tried them on and we measured them. Each needed to be shorter. Simone's by 6" and Adri's by about 24"! Then I tore two layers of lace from Simone's and took off the ribbon & pearl detail from Adri's. Took much longer than I thought. The sleeves on each dress were too puffy so I cinched them in and sewed them. I cut the tie belts off each dress, too, so we could replace them with white ribbon ones. I made a Peter Pan collar for each dress, attached them, and the dresses looked almost identical. Adri's mom purchased white knee highs for $3 a piece and a pair of black ballerina flats for $16 at Target. Oh, and she also got the zombie blood, probably the most important part of the costume. I couldn't find flats in Simone's size, so I sacrificed mine. They had a cute accent buckle on the top that was torn right off in 2 seconds. The girls tried the finished costumes on and then Adri's mom bloodied up the dresses and socks. The next day was Halloween so after school Simone went right to Adri's and her mom curled both girl's hair. I scrounged up white barrettes and went to help them get ready. Mom put white makeup on their faces and then darkened their eyes with black. They put the dresses on and then fresh blood was added for that "just hacked up by an axe" look. Then she dribbled a little blood from the corners of their eyes and mouths and across their throats. They yanked the bed pillows out of the cases and used them as trick or treat bags. We were very proud of the outcome.