Twisty the Clown
by Katrina

Twisty the Clown
by Johnny

The Evil Queen and Twisty the Clown Costume 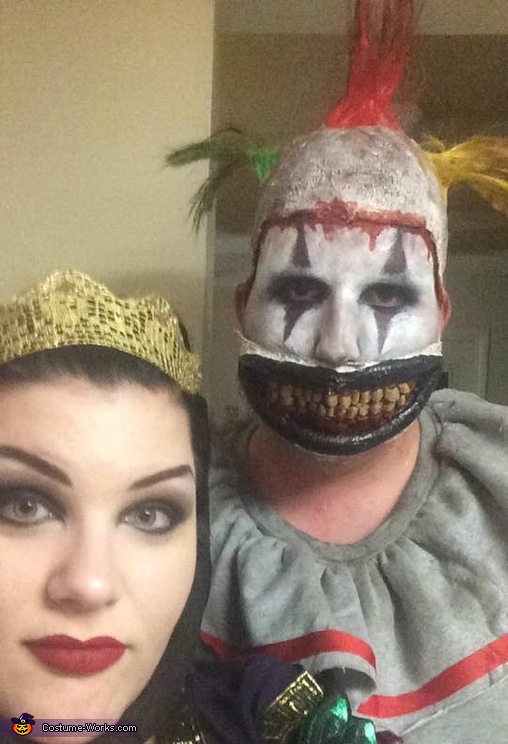 Beauty and the Freak...

A word from Aynsley, the 'The Evil Queen and Twisty the Clown' costume creator:

This year I was the Evil Queen from Snow White and I made my boyfriend Twisty the Clown from American Horror Story (season 4). My costume and his costume were moderate priced (mine was about $68 and his was $48). I made the crown out of lace, mod podge, gold spray paint and purple crystal beads. I found a surcoat dress pattern and had help from my seamstress sister and I embellished the surcoat dress edges with medieval looking ribbon and hot glued it to the edges of the surcoat dress. I carried a fake apple with green, glittery "dripping" poison. I pinned the mystical cape to the surcoat dress and long sleeved black shirt. And I used my own make up to create the make up that the Evil Queen in the Disney movie wore hers.
My boyfriend challenged me to make him something he'd dread seeing and as an American Horror Story fan, I thought who better to fit the bill then Twisty the Clown. I had seen on Pinterest that there was a zombie mask that used fake nails for the teeth and liquid latex and toilet paper for the skin part. I took it to the next level with a foam curling rod for the lips. My boyfriend purchased a light grey sweatsuit and gloves from Wal-mart, his Grandma had the yarn for the pom poms, and a couple of different Halloween make up kits for me to use on him. I purchased the hair pieces from the dollar store and the bald cap from Party City. I sewed the ruffled cuffs and hot glued the ribbon on his sweatsuit and ruffled neck and wrist cuffs. Hot glued and sewed the pompoms on the sweatshirt and dirtied the whole costume on my driveway. I did the make up by looking and referring to Twisty the Clown's make up. His costume got stopped everywhere we walked.