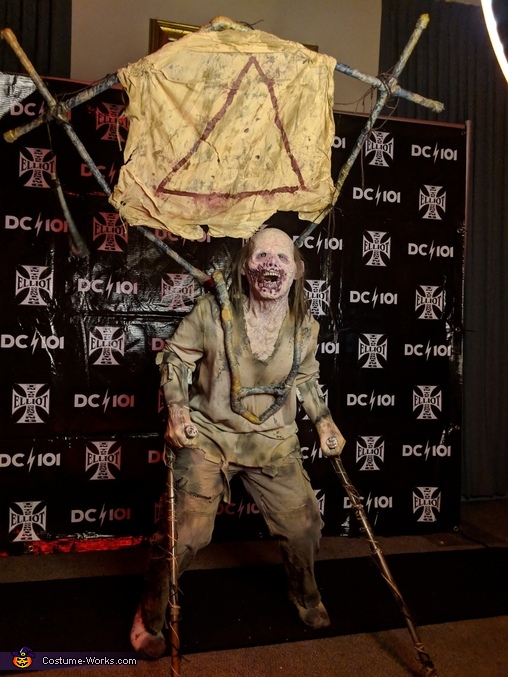 A word from Jake, the 'The Disciple' costume creator:

Welcome... THE DISCIPLE. With his feet removed to keep him from wandering too far from his one true king, THE DISCIPLE hobbles the Earth, spreading the terror of the VOID he came from. THE DISCIPLE carries the symbol of his realm, THE VOID, above his back, crudely built into a rustic metal contraption. He limps with the support of his crutches, tied into his arms with barbed wire. THE DISCIPLE's skin, as old as time, has withered away, leaving only death behind.

The "metal contraption" part of my costume I made from mostly PVC pipe. Bending multiple sections into shape (using a heat gun) and connecting sections with standard PVC fittings. I reinforced certain areas with fiberglass to help keep it durable since it is so tall. I then wrapped it in fabric and coated in latex for texture, followed by a rusty paint job. The pants and shirt were just normal clothing I bought from Walmart that I distressed using scissors and sand paper, then stained with acrylic paints. The "VOID" flag is made from cheese cloth that I soaked in latex and painted. The crutches are real crutches that I painted to look rusty and wrapped in fake barbed wire and jute twine. The gloves are gardening gloves that I painted with acrylics to look old and dirty. The bloody socks are socks that I painted to look bloody at the tips and in the ankle area. This gave the effect when I wore them that my feet had been cut off, then my legs were broken at the knees and bent forward. The socks acted as a "bandage" wrapped over my "bloody stumps". When I hobbled around on my crutches it really looked like I was walking on these floppy, broken legs (with severed feet!).

The mask is a full head silicone mask that I got from a friend of mine who makes these for a living. It moves like real skin and looks like real skin! It even has hand punched hair for that extra touch of realism.