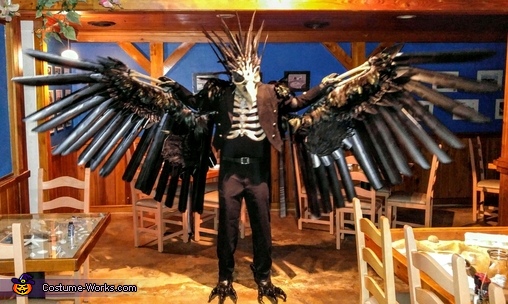 A word from William, the 'The Dead Crow' costume creator:

The Dead Crow idea came directly from the raven skull mask I found at a Halloween & More store. I didn't buy it at first, but I sketched my idea out from it. When I went back, they had already sold it so I had to wait almost a year for them to get it back in stock. I adorned the skull with feathers, then I cut the jaw off and attached it the spout of a water pitcher (the kind for watering plants), which was then attached to the head harness and straps from a painter's mask. This was so is moved when I talked or cawed. Next, I did a lot of research on bird wings; how they looked, worked, moved. I made the large feathers out of vertical blinds, which I stabilized with thin strips of wood with ends I cut to look pointy. Then I spray painted them black and attached elastic straps to each individual blade to p properly mimic a bird wing when it spans. I attached them with curtain clips to shelving brackets, which attached to my wrist and right above my elbow via Velcro straps. The bones from my wrist are plastic and from a simple set of a bag of bones from a Halloween store. The bones, as well as the skeleton gloves I got from Party City, were pretty white and didn't match the color of the skull. In order to get them closer in resemblance, I rubbed black charcoal and yellow pastel on them. To fill up the area under my forearm and bicep, I used two different pairs of black wings from Party City. Next, I made my crow feet from a pair of high heels I found at Goodwill, then I inserted them into an old pair of black shoes to achieve the hieght I was looking for. I found two pairs of Velociraptor gloves for kids from Jurassic Park, so I cut them up and nailed them to the shoes on the bottom and used Velcro on top. I used fake talons from Hobby Lobby and inserted them in the already molded claws to make them appear longer. Then I spray painted them black too. The rib cage i ordered online, but i just rubbed the yellow pastel on that one. The tailcoat is actually a coat I recycled from a Mad Hatter costume I made a few years ago. Underneath it all, I'm wearing a black morphsuit, which I had to alter by cutting eye holes out to see better through the mask, and cut an area around my mouth and chin so the jaw would move properly. Oh, and this is me wearing this costume. I had a blast putting it together.