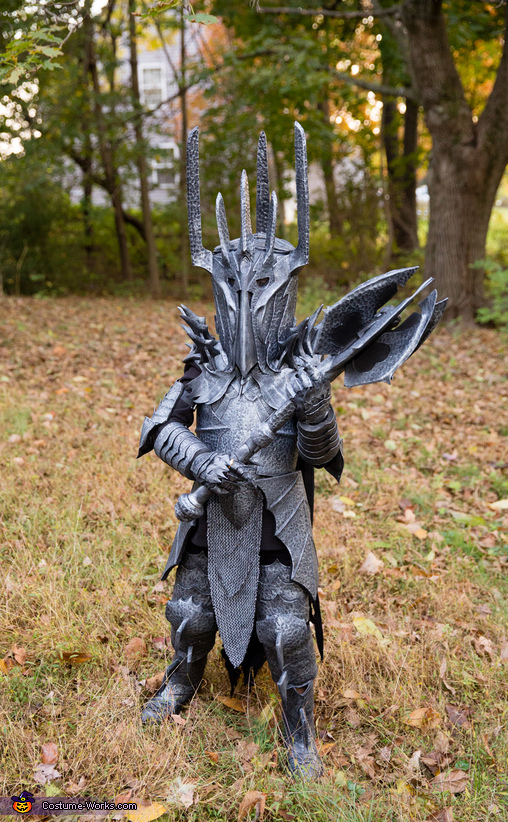 A word from Jennifer, the 'The Dark Lord Sauron' costume creator:

My son Hayden came to me earlier this year asking (again) to be Sauron from The Lord of the Rings. I finally felt we had the means and opportunity to do it right this year. My 10 year old son, Hayden, is very into Lord of the Rings. He's read all of the books and seen all of the movies several times. He even has the ring inscription memorized in the original "black speech" of Mordor! We did a lot of research into the character to make sure we could be as accurate as possible while still making it a costume comfortable enough to wear and play in.

This costume is made mainly of EVA foam floor tiles and craft foam shaped with a heat gun. I used Barge Cement to glue it all together. Thinner craft foam layers were added on top of the pieces of floor tiles to give it the armored effect we were going for.

Each piece of armor was created by making a pattern piece out of paper based on measurements and freehand sketches. I transferred the pattern pieces to the foam with silver sharpie markers. I cut everything out with a snap off utility knife (resharpened often). The pieces of foam were shaped using a heat gun and hand manipulation. Most of the parts of the armor consisted of a base of the EVA foam floor tiles with 2mm, 3mm, and 6mm craft foam layered on top. Everything was glued on with Barge Cement (amazing stuff!).

The torso of the costume has several pieces of 2mm and 3mm foam attached to it. The shoulders spikes were very important to the design of the costume and were one of the first things I worked on. These were made with two layers of 6mm foam glued together. Then they were cut out and shaped with sanding sticks and the Dremel tool. They were attached over a crescent shaped piece of 6mm foam to give them more stability.

The base of the gauntlets are a pair of black cotton gloves. I used 2mm craft foam pieces to create 3 piece jointed fingers. The back of the hands had more 2mm craft foam layers. We added a gold plated stainless steel ring engraved with the ring inscription from the Lord of the Rings. We used a glow in the dark/black light responsive paint inside the engraved part as an added bonus effect.

The upper arm does not have an articulating elbow, but I did pop out the elbow piece with a few foam wedge shaped pieces to give it some shape. The upper arm armor is attached with buckles, but the forearms were going to be seen more. I decided to attach them by lacing them up. I added two pieces of leather to either side of the armor. I added eyelets to the leather in order to lace up the two sides with a piece of leather lace.

The armored boots started as Deer Stags Ranch Kids cowboy boots. I covered them in overlapping foam layers to look like plates of metal armor. I made the toe even pointier than the cowboy boots originally were. The boots and the legs also have spikes on them. I glued 6mm foam sheets together and cut the spikes out and shaped them. The are glued onto the front of the boots and leg armor. The leg armor is jointed to the knee piece with no-roll elastic.

The cape is made of Crinkle Cotton Gauze from Fabric.com. I cut the edges in a zig-zagged fashion and added uneven strips of the fabric on top of that. After cutting I washed the cape to make it more raggedy. It's attached by two pieces of velcro at the back of the shoulders behind the spikes.

The mace started out as a Nerf Mace (no longer made - we found it on ebay). I added extra blades to the mace using 6 mm craft foam so there was a total of 6 (instead of 3). I added a 2mm craft foam piece on either side of each blade that created the edges and the points that stick out.

The entire costume is textured with a dremel tool to give it a hammered metal effect. Once the texture was completed the foam was sealed with a propane torch and coated with Creature Cast Liquid Rubber. It was then dry brushed with Sargent Arts Liquid Metal in silver (an acrylic paint). I also did a few layers of a thin black wash over top to give it a more aged and damaged appearance.

This costume was started in the beginning of September and finished with about 24 hours to spare before trick-or-treating. I don't have much weekend time available (as a photographer of mainly weddings those are booked years in advance). I primarily worked on this for a few hours per weekday for those 2 months.

We had a phenomenal reaction to this costume when we went trick-or-treating. Several people asked to take his picture. Many people said he had the best costume of the night. Even people not familiar with the character of Sauron were impressed by the costume. Hayden remembers many people saying "wow" and "that's so cool." Everyone was highly complimentary. Everyone wanted to know who made it and what it was made of.

Hayden wants you to know it has been the best Halloween ever!