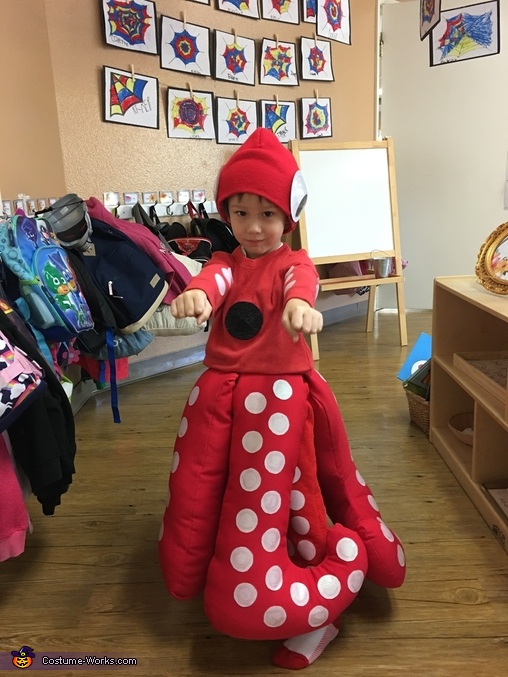 Bobby is happy being an octopus

This homemade costume for kids entered our 2018 Halloween Costume Contest.

A word from Noriko, the 'The Cutest Octopus' costume creator:

My son; Bobby is a big fun of octopuses, and he wanted to be the one of them for this Halloween; however, there was no octopus costume for sale; so I decided to make one. The mantle part was easy. I found a 49ers beanie hat at Good Will for $4. I colored the white part in red and attached big eyes. I also purchased a red shirt with long sleeves and a red long pants. Two arms and two legs became four arms of octopus, so I needed to make four more arms. I purchased red fabric and fiber as stuffing and made the rest of four arms. I used white shining duck tapes to make all suckers which worked perfectly. The most difficult part of making this costume was attaching four arms to the pants. I placed two each in front and back, and then hand sawed them. By the time I finished that, it was 3 am... On the morning of Halloween, my son tried the costume but the bottom was too heavy and he could not walk... so, I quickly attached the pair of saspender and it was finally completed!