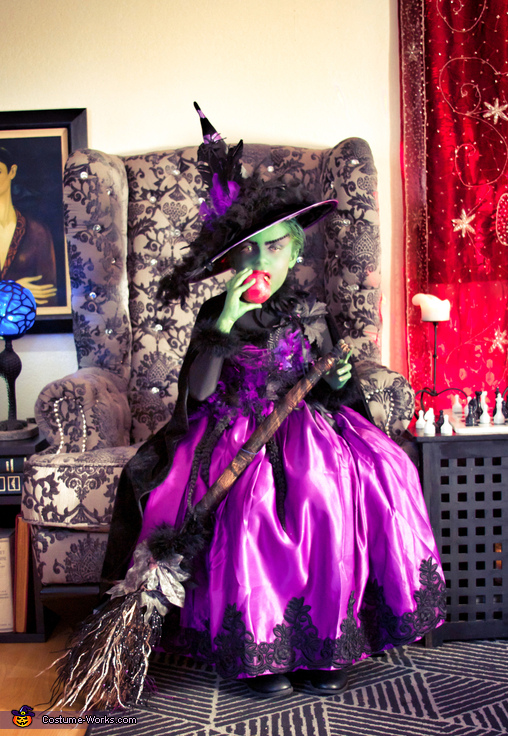 A word from Stasha, the 'The Crystal Witch' costume creator:

I made this costume for my daughter Kalla, with all my heart and soul. Since she’s a 7 year-old non-verbal girl with autism, I had to work extra to connect her interests, so we can choose the exact right theme that she will really enjoy. Halloween has always been her favorite holiday, which puts a lot of pressure on me (but I don't mind). She always expressed the desire to dress up and pretend she’s somebody else, even when it's not halloween. The idea for the witch costume came from her love for the color purple and near-obsession for any movie or a cartoon that involves a witch (especially the green ones!).

I started off the costume by buying a plain purple pageant dress. But as you can imagine, after that is when the fun really began. It took me many sleepless nights and at least a dozen or so trips to different craft stores, to collect all the necessary materials and accessories. The broomstick, dress, and witch hat have all been hand-crafted and customized by me. Feathers, boas, lace, spiders, black moss, branches , leafs, and twigs are just some of the materials used to create this spooky witch costume. Not only was Kalla the happiest witch you’ve ever seen, but she put up with almost two hours of hair, make-up, dressing, and picture taking without a single complaint. I was deeply moved by her surreal performance portraying the most unique witch I’ve ever seen. The whole time we were Trick-or-Treating, she was receiving nothing but compliments and admiration. She even spooked her little brother and brought him to tears (oops!). Overall, I could not be happier and would love to share a little bit more about her with you.

Kalla might seem like your ordinary 7 year old girl. She loves nature, dolls, and playing with her jewelry. But there’s a lot more beneath the surface that makes her very, very unique. Most would think her non-verbal autism is a hinderance. As if it would somehow stop her from controlling the world around her. But the “disability” is actually just a facet of her otherworldly powers. For some reason, she always just seems to get exactly what she desires. And sometimes, when the moon is full… she puts on her black hat, grabs her trusty broom stick, and flys off into the night to spill her laughter in the universe. If you listen closely, you can hear the cutest little cackle off in the distant. That’s Kalla the Crystal witch, happy because she sees the world as it is, and not what all of us “normal people” believe it to be.