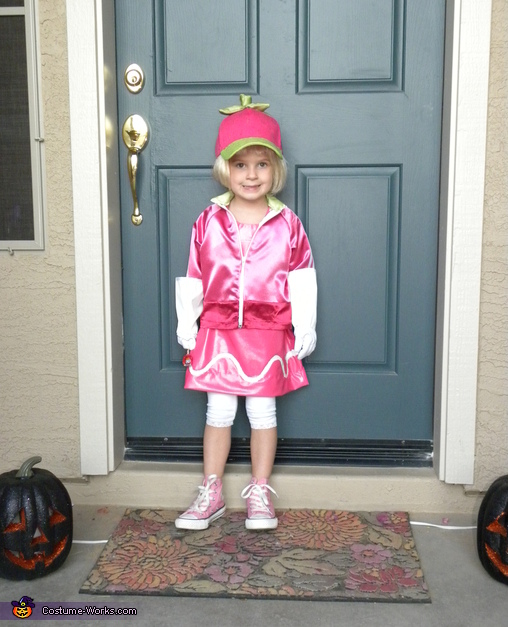 A word from Lisa, the 'Taffyta Muttonfudge from Wreck-It Ralph' costume creator:

My daughter Chloe, age 4, saw Wreck-It Ralph on rental back in March and has been in love with the adorable, pink-clad lollypop lover Taffyta ever since. As much as I told her that Taffyta was the bully and tried to get her to like Vanellope instead, she would not back down, promising to only love the "nice" Taffyta at the end of the movie. So when she told me so enthusiastically that she wanted to be Taffyta (NICE Taffyta) for Halloween, I couldn't resist. After all, Taffyta's outfit is absolutely fan-taste-ic! Of course, they don't sell Wreck-It Ralph costumes, so I had to make it from scratch. And did I mention yet that I am a novice sewer? I had never used a pattern before! Still, I promised her she'd be Taffyta, so Taffyta was who she would be.

I borrowed a friend's sewing machine, found a couple patterns from Simplicity (#1567 for the dress and #2292 for the jacket) and made some modifications. The hardest piece was the jacket. My mom and neighbor, who are more experienced sewers, helped me with the zipper and raspberry stripe on the jacket. The rest I did all by myself! The racing stripes on the jacket are white ribbon that I attached with iron-on no-sew tape.

The dress was tricky because the fabric I chose was hard to sew through and melted when ironed. If I had chosen cotton or satin, it would have been much easier. But when it was finished, it had this cool, shiny, faux-leather look. I then painted the frosting squiggle on the skirt with fabric paint and sprayed the whole thing religiously with fabric glitter to get that Taffyta shine.

The wig and gloves were bought through an online Halloween store. The wig was an adult-sized bob which made a perfect Taffyta length on my daughter's small head. I used a wig cap underneath and she actually did a great job keeping it on. The gloves were Atomic Betty gloves that I hemmed and modified to fit her small hands(very sloppily--I'm a rookie, and I just eyeballed it. But no one can really tell!).

The hat was my favorite part. I bought a pink baseball cap from Amazon. Its adult size looked large like a helmet on her smaller head, and it was velcro on the back so I could tighten it enough to help keep her wig on. I created the strawberry stem all by myself by eyeballing it and using trial and error until I got something I liked. I painted the brim a matching green, used a silver Sharpie for the strawberry seeds, and then sprayed it too with fabric glitter. The pink Converse shoes are from Nordstrom's online, and she still wears them all the time, as well as the jacket, to school, the park, etc.

The only flaw in this costume is the leggings. I could not find anything pre-made that had nice big thick pink and white stripes, so I bought some pink ribbon and thought I would just sew it onto white tights. I just could not figure out how to put that ribbon on without her leg inside it, because without a leg in there the tights shrunk down and I couldn't sew it like that since the ribbon doesn't stretch like the tights do. I even tried sewing the ribbon on while she was wearing the tights. Ha! After a very stressful time ("Ouch, Mom! You poked me again!" "I'm sorry, just hold still dang it!"), I finished all the stripes only to discover that when she tried to take off the tights, the ribbon wouldn't stretch to fit over her heels! By that point it was almost Halloween, so we gave up and just had her wear white legging capris. Still cute! But the lack of pink stripes will always haunt me....

All in all, this costume took me about 8 weeks from imagination to actualization (I have three small children, so my free time to work on it was limited). Still, I probably spent 50-60 hours on it (since I am new at sewing, it was sometimes a long, slow process!). As for cost, I had to buy quite a few sewing tools that I didn't have, but if you already have a good selection of sewing supplies, then you could make this costume in under $60. That includes the $25 shoes.