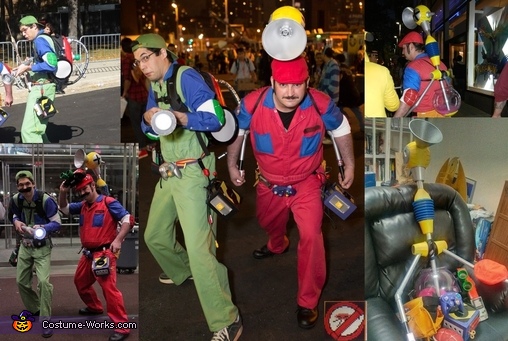 A word from Sean, the 'Super Mario Ghostbusters' costume creator:

This year, my friend Greg and I decided to merge Super Mario Bros and Ghostbusters. Our first challenge was to differentiate ourselves from this: www.youtube.com/watch?v=srXN-1…

Our second was to find a crossing point between the overly cartoony look of Nintendo's flagship characters and the more realistic proportions of the Ghostbusters. We decided on basing the costumes on the Super Mario Bros Movie from 1993 that most people have done everything in their power to forget. The coveralls and hats were based almost entirely on that, and eventually, so was our facial hair.(Gregs mustache disintegrated after the first day of the con, might have had something to do with him taking it off and sticking it in his pocket.)
The packs were based off of each brothers respective Gamecube game. We built the Poltergust 5000(ok, so that's the one from the 3DS game) out of a hard shelled backpack, some heater hose, PVC, peices of a muffin tin, and some battery powered lighting fixtures. The F.L.U.D.D. was made up of a 3 gallon plastic fish bowl, a bellows plunger, a hamster ball, a plastic funnel, the remaining cups from the muffin tin, and a skeleton of PVC piping. While we were walking around, i filled the fishbowl with pink slime, just like in Ghostbusters 2. If you look closely into the funnel of the F.L.U.D.D., you may notice that it looks like a speaker. That is because it is, and while we walked around, I had the music from the Ghostbusters NES game, Luigi's Mansion, and all the ghost themed Mario stages I could find loaded on an MP3 player built into the handle.
Now for the rest of the ghost catching gear. The ghost traps were constructed from actual Gamecube units, modified to look like the traps from the Ghostbusters franchise. I will be taking better pictures of all of our gear shortly. Greg carried the Dual Scream(original DS with the E. Gadd etching) and I carried the Gameboy Horror. I also converted a Virtual boy into a pair of Ecto goggles, replacing the lens apparatus with warp pipes.
Greg designed our 8-Bit Boo Ghostbusters patch, and our Nintendo Racetrack inspired nametags.